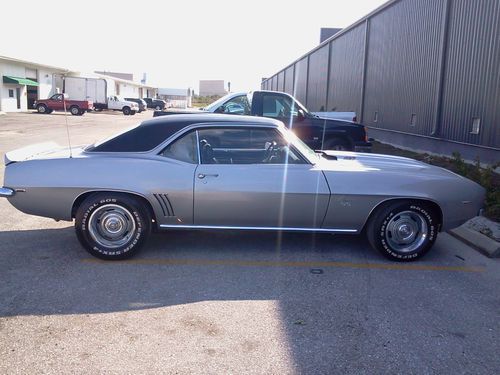 WE HAVE A 1969 X44 CODE 427 512 COPO MOTOR THAT IS FRESH,HAS SOLID CAM AND ROLLER ROCKERS,500 MILES PAINT CODE DELETE WHICH IS VERY RARE CAR WAS PAINTED 3 YEARS AGO AND THE FACTORY BLACK TAIL PANEL WAS LEFT SILVER FOR THE COPO CLONE PEOPLE,M21 MUCIE 4 SPEED TRANS WAS JUST WENT THRU WHEN MOTOR WAS DONE AND 1500 WORTH TO BE EXACT,PAINT HAS PLENTY OF CLEAR FOR ANYONE WHO WANTS TO TAKE THE FACTORY LOOK AWAY FROM IT BUT IT DOES LOOK GOOD AS IS WITH NO SIGNS OF RUST.VERY FAST CAR ,IT RAN 11.90S 3 YEARS AGO WITH RACE CARB,CAR HAS HEAT HIDDEN UNDER DASH MIGHT HAVE BEEN HEATER DELETE CAR,I HAVE CORRECT LOOKING CARB AND FUEL LINE WHICH WILL BE ON CAR.