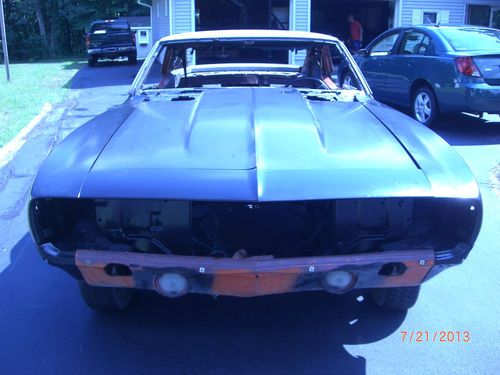 1969 CHEVY CAMARO SS (ORIGINAL RARE FACTORY HUGGER ORANGE) MASS CLEAN TITLE , THIS IS A RESTORATION  PROJECT WITH ALL ALL NEW SHEET METAL, LEFT AND RIGHT FENDERS ,COWL HOOD , RADIATOR SUPORT, WHEELS AND NEW FRONT END BOLT KIT AND BODY AND RADIATOR SUPORT MOUNTS.  FRONT NOSE IS BOLTED ON, I HAVE LEFT AND RIGHT FULL QUATER PANELS THAT NEED TO BE INSTALLED, ALSO LEFT AND RIGHT OUTER REAR WHEEL WELLS AND LEFT AND RIGHT TRUNK DROP OFF SAIL PANELS, CENTER TRUNK PAN ,AND REAR TAIL LIGHT PANEL, AND DRIVERS SIDE FLOOR PAN. I HAVE COMPLETE INTERIOR THAT NEEDS TO BE RECOVERED,TAIL LIGHTS , HEADLIGHT BUCKETS , FRONT AND BACK BUMPERS , DASH BOARD CLUSTERS WITH WIRE HARNESS AND FUSE BOX AND REAR WIRE HARNESS,  FACTORY STAPLE SHIFTER ,TOP HALF OF MIDDLE CONSOLE, FRONT SUBFRAME IS SOLID  WITH NO RUST AND WAS PAINTED TWO YEARS AGO, REAR FRAME RAILS ARE SOLID AND RUST FREE AND STILL HAVE THE FACTORY PAINT ON THEM, THE FLOORS HAVE HOLES ON THE DRIVERS SIDE AND THE PASSENGER SIDE IS SOLID WITH JUST SURFACE RUST, TRUNK PAN HAS PIN HOLES IN THE MIDDLE SECTION, I HAVE ALL THE WINDOWS FOR CAR EXCEPT FRONT WINDSHIELD, DRIVERS DOOR IS SOLID WITH NO RUST, PASSENGER DOOR HAS ACOUPLE OF PIN HOLES, ONE ROCKER HAS ACOUPLE OF PIN HOLES BUT NOT BAD OTHER SIDE IS SOLID, I HAVE SOME WINDOW CHROME TOO. CAR ORGINALLY CAME WITH A 12 BOLT BUT HAS A 10 BOLT NOW.

INCLUDED IN THE BUY IT NOW PRICE IS A COMPLETE GOODWRENCH 350 MOTOR, I WAS TOLD BY THE PREVIOUS OWNER THE MOTOR HAS 20,000 MILES ON IT, I TOOK IT APART TO CLEAN IT AND PAINT BUT NEVER HAD ACHANE TO FINSIH, BUT I HAVE EVERYTHING TO PUT BACK TOGETHER CARB INTAKE , INITION ,PULLYS ,FUEL PUMP, WATER PUMP, I ALSO HAVE TRANMISION AND DRIVE SHAFT.  (I WILL NOT BE SELLING THE MOTOR OR TRAN UNLESS I GET BUY IT KNOW PRICE)

I WILL HELP LOAD ON TRAILER IF NEEDED .THIS IS A REAL HUGGER ORANGE SUPER SPORT AND I HAVE A CLEAR MASS TITLE FOR CAR .

SERIOUS BUYERS WITH ANY ADDITIONAL QUESTIONS OR INTEREST IN INSPECTING CAR IN PERSON BEFORE PURCHASING IT ARE WELCOMED TO CALL ME AT 413-314-7815 (CHRIS)
THIS CAR IS ALSO BEING SOLD LOCALY AND I RESERVE THE RIGHTS TO END THE AUCTI-ON AT ANY TIME. IF YOU DO NOT HAVE ANY FEEDBACK YOUR BID WILL BE DELETED