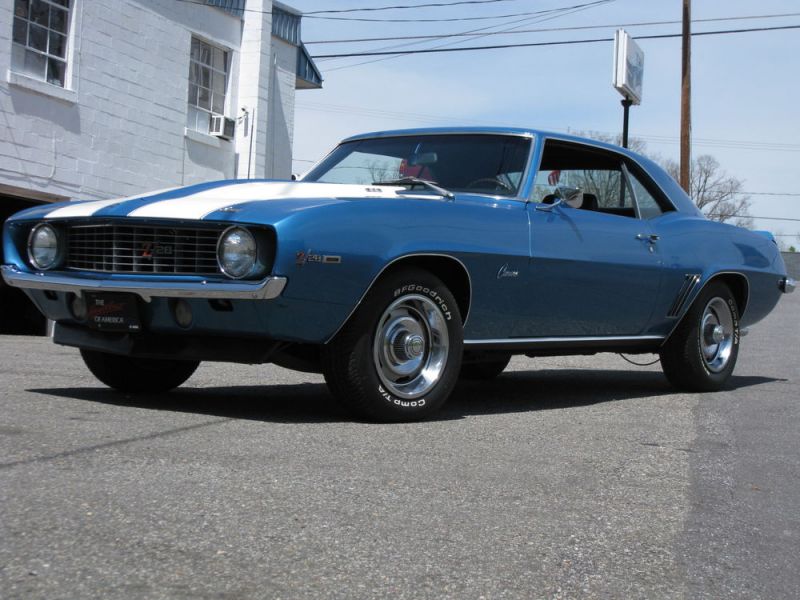 Feel free to ask me any questions about the car : evelyneesschellenger@ukdancers.com .

1969 Camaro Z/28 ,this is a Real X33 D80 Z! Engine is 302 ,Front Pad Stamp reads (V1009DZ= Oct/9/69/DZ=302) ,casting# (3970010), The Build date on the Car is 10C (Oct third week) which is in line with the build date and Correct.. The Trans is a Correct 4-speed Muncie w/Correct Hurst Shifter ,but Does Not match the car, the Rear End is a Multi-Leaf 12-Bolt 3.73 Posi-traction (i did not find any dates on rear axle). This Z/28 Camaro Runs and Drives Great ,No Problems!
The paint on this car is Correct code (71) Lemans Blue w/White Stripes and is 25 plus year old, but Still looks Good and Slick, No Paint blisters,rust bubbles ,etc., but keep in mind it's old paint and Not Perfect.. the body is very Straight and Solid as a Rock! FloorPans,TrunkPans are also Solid and Rust Free! If it has ever had a Panel Replaced they are "GM" , every bodyline looks Great ,Doors shut just like new, etc.. The Interior is code (711) black and Looks Mostly Original, and in Good condition,the carpet is showing some wear but still looks good, the passenger side front seat has couple small spots that someone has tried to repair.. Dash,Console,Headliner,Door Panels,etc, look Great.. All Lights,BrakeLights, Turnsignals, interior lights,etc Work as they should.. All Gauges are Working Except the Tach (i have not had time to check the problem), even the Clock still Works! . All Glass looks Good, Bumpers look to have been replaced @ some point,Chrome parklight bezels are showing age, other Brightwork looks Good. The Z is sitting on a B/F Goodrich Tires and are Very Good, correct 7in Rally Wheels w/correct bands & Centers.