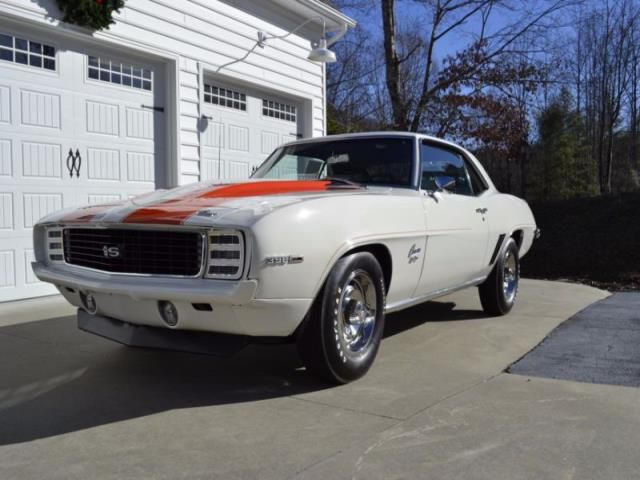 Z10 Camaro Although they frequently are identified as “pace car coupes,” the 1969 Camaro Z10s are not merely hardtop versions of the popular Indy pace car replicas. The truth is, they’re even more rare (between 100 and 200 were built), and were built for a very limited region in the southwest US (although one was sold new in Tennessee). They did, of course, receive the same Dover White paint job featuring Hugger Orange stripes, and even the SS396 cars like this one here, used a matching white tail panel in place of the big block’s usual blacked-out piece. With a high-quality restoration and a cowl tag that has never been removed, this is a real-deal Z10 car, and is one of the rarest of all 1969 Camaro’s ever produced. All Z10 coupes were painted code 50 Dover White with Hugger Orange stripes with matching white rocker panels. They also all came standard with the D80 spoilers, ZJ7 rally wheels, ZL2 cowl induction hood, Z22 Rally Sport package, and Z27 Super Sport package. All Z10’s built in the Norwood Plant received the Z10 stamp on their cowl tags, making them some of the easiest Camaro’s to document. This has always been a solid, clean car. It has received a “frame off” 4 year restoration. Recently the engine and engine bay has been freshened up with period correct components including a rebuilt numbers matching Rochester Quadrajet carburetor and looks outstanding. The Z10s received all the usual Camaro trim; however, this particular model received a special order endura front bumper and limited production chambered exhaust. (Many States banned this option in mid 1969 due to the loud exhaust). All Z10s were also RS/SS cars, so this one carries a correct SS grille with working vacuum actuated hidden RS headlights, the special white rocker panels, and even the Hugger Orange pin stripes that delineate front and rear fender lines, a detail that many restorations leave out. The stainless on this car has been polished, and it carries the optional gill inserts ahead of the rear wheels. A vast majority of the Z10s were small block cars, however this model is equipped with a period correct L34 350 horsepower 396 cubic inch engine. While the standard transmission was a 3-speed manual, any option you could get on a regular Camaro was available on the Z10s, and as a result this one sports a period correct M21 4-speed manual driving a heavy duty 12-bolt posi rear end. The chassis is nicely finished, with satin black floors and rebuilt stock suspensions fore and aft, including correct reproduction spiral shocks front and back. A new gas tank and reproduction chambered exhaust have been also recently installed. For years, nobody believed that the Z10s even existed. They’d show up now and again, but most people—even experts—simply assumed someone had built it themselves after seeing a pace car and being inspired. With a little digging, evidence started to emerge and now these cars are reliably documented. This Car is included in the Z10 Registry which lists about 70 cars. There’s no question that they’re uncommon, and are among the rarest of all 69 Camaros. Clones are fairly common. This one is unquestionably the real deal and it has been beautifully restored to highly accurate condition. The glove box carries the signature of Mario Andretti the winner of the 1969 Indianapolis 500. I will let the photos tell the rest!This vehicle is not perfect but extremely well done.As with any vehicle of this age it is sold as is with no warranties implied or offered.