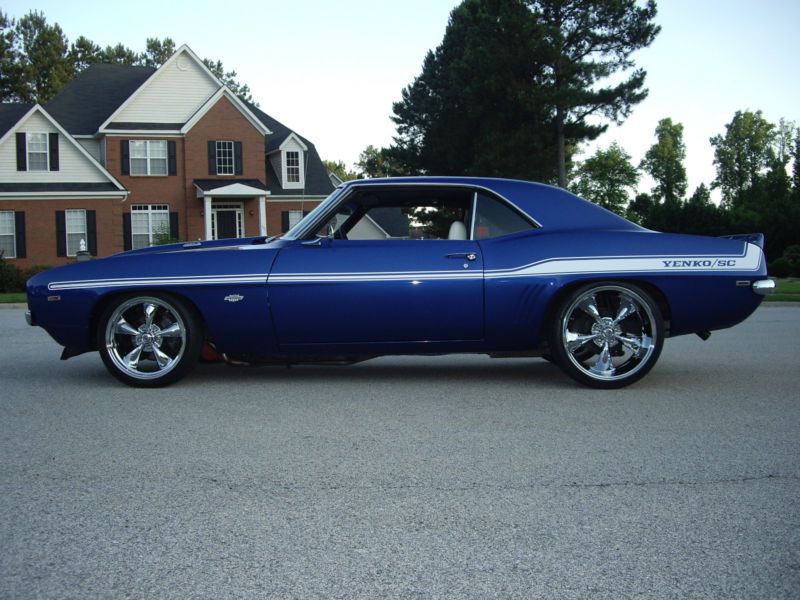 If you have any questions feel free to email: kellykbbonney@oxfordfans.com .COMPLETELY RESTORED NICELY DONE 1969 CAMARO MUNCIE M21 4SPD BIG BLOCK 12 BOLT POS. TRACTION
WITH  373 GEARS...VERY NICELY DONE. THIS 1969 CAMARO YENKO REPLICA IS NOT A REAL YENKO. IT STARTED AS A 350 V8
4SPD SS X44 CAR. THE YENKO VINYL STRIPES CAN EASILY BE REMOVED AND REPLACED WITH THE SS STRIPES. THE CAR RUN, STEER
AND STOPS GREAT. IT HAS PWR DISC BRAKES IN THE FRONT...DRUMS IN THE REAR AND PWR STEERING. IT SOUNDS AWSOME!!! THE
CAR ALSO HAS A BUILT 396 WITH A NICE SOUNDING HYDRAULIC CAMSHAFT THAT IS RUNNING THRU CERAMIC COATED LONG TUBE
HOOKER HEADERS AND FLOWMASTER 40 SERIES MUFFLERS. THIS CAR HAS A BEAUTIFUL COLOR COMBINATION...DARK ELECTRIC BLUE
WITH NEW LOOKING IVORY WHITE INTERIOR WITH CONSOLE IN DELUXE GAUGE PKG WHICH INCLUDE, TACH, CLOCK AND A NICE
COMFORT GRIP STEERING WHEEL. IT HAS 18'S IN THE FRONT AND 20'S IN THE REAR, WHICH GIVES IT A GREAT STANCE. IT GET
LOTS OF ATTENTION!!! IT REALLY IS A BLAST TO DRIVE. IF THERE'S ANYTHING THAT I DIDN'T INCLUDE IN MY DESCRIPTION
THAT YOU HAVE A QUESTION ABOUT