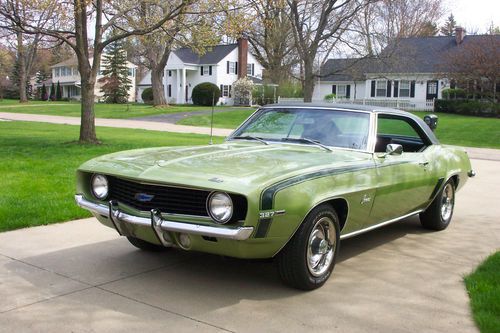 1969 Camaro , 327 motor, 350 turbo, all matching numbers, engine #9n562144.  Factory bumper guards, console w/T shifter, air conditioning , power steering, tinted windshield , dual rear view mirrors, 4 wheel drum brakes, 15 x 7, factory Rally Wheels, vinyl top and rear spoiler.  Does have after market am/fm cassette stereo.  Very solid and original body, floors, quarter panels and trunk.  Underside is just as "impressive" original survivor.  These cars are only original once.  Repainted in the '90's the original color.  Stored indoors for the last 20 years, original Alabama car.  Two owners in the same family until I purchased the car, have manual and multiple documents, proving it was an Alabama car until the 1990's.  Have pics before and during repaint, professionally done and still like new.  This is one of the last , 327 built. during the second week of December 1968, by the end of the month the , 327, was no longer available.  The first generation cars [67- 69] were recognized as the prototype, of the muscle car, and they achieved legendary status with enthusiasts over the years.  The 1969, is the definitely the most stand out year.  The body lines were sculptured just enough to significantly change the look of the car, from the previous 2 years.  It became the Camaro to own.  Classified as a muscle car.  These cars , went on sale September 29th 1966 , for the 1967 model year.  Choice power plants 250 ci , inline 6,302, 307, 327, 350, 396. Car runs good, shifts perfect, has plenty of power, show and drive anywhere, a nice rust free original car, for 44 yrs old.  The only imperfections , that I know , are a small tear on the drivers seat.  Trans , will drip a small amount of oil, after its been sitting awhile.  AC, not working, but, all there, was working a few years back, I think it needs a clutch on the compressor.  I have tried to represent the car as complete and honest as possible.  I reserve the right to end the auction early as the car is for sale locally.  Selling because lost space in building, where it was to be stored.  Have a clear Ohio Title.