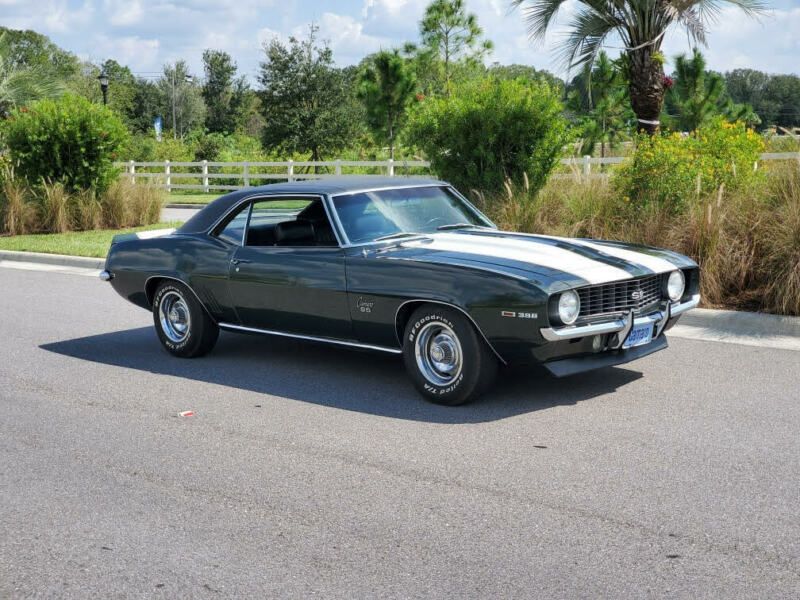 1969 SS Camaro still retaining its original all Numbers matching. Born with 396/350 HP engine with the turbo 400
transmission and 12 bolt 331 Posi rear end. This is a two owner car that still wears 70% of its original paint. The
second owner purchased this Camaro in the late 70's and was friends with the original owner. This SS Camaro was
always garage kept. The 2nd owner tagged the car and drove it sparingly for the first couple of years then moved
from NY to SC in 1984 where it was then stored in a climate controlled carpeted garage for the next 36 yrs. The
lacquer paint is in wonderful condition for it's age. The original owner had the dealer install a Cowl induction
breather and hood. And removed the SS hood and stripes and applied the painted Z-28 stripes and color coated the
rear taillight panel. The car currently has 82,896 original miles. The #s matching 396/350 HP. engine has never
been out of the car and still retains its original Chevy orange paint, NO RE-STAMP HERE. The original #s matching
automatic trans was rebuilt and the #s matching 12 bolt 331 Posi rear end was just serviced. also replaced brake
calipers, brake pads, rubber brake lines, new master cylinder, new water pump, thermostat and gasket, new fan
belts, new $600.00 re core on the original curved neck 4 core radiator with original tanks, frames and date tag,
new upper and lower radiator hoses and clamps, new heater hoses and clamps oil and filter change with Valvoline 40
weight HP. oil, rebuilt carburetor, trans service with fluid filter and pan gasket. A new dual exhaust system was
also installed. The tires are BF Goodrich Belted T/A bias tires and were installed back in the day and are not dry
rotted and are like new.