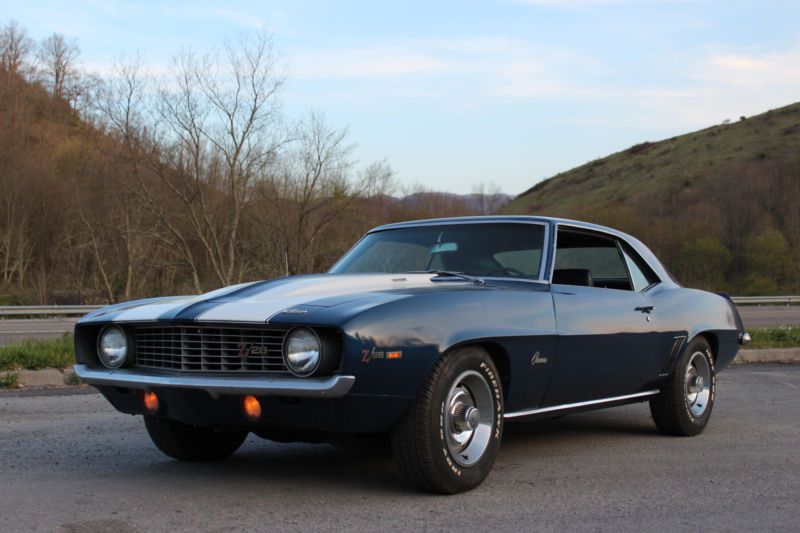 Just email me at: libbylmmilosevich@magpiefans.com .

Up for sale....All offers will be considered...
Please read entire ad, have your funds in order ask any and questions, make inspections and if need permission
before submitting offers. Thanks
To start off with yes I know it's rougher than 3 days in County jail but it's a real Z that needs and is worthy of
a proper restoration. It is very cool to own a car that I once rode around in as a kid with my dad but
unfortunately don't have time to give this car the proper restoration it deserves So I've decided to pass it on.
1969 Z28
Trim Tag info....
01C- Build Date Jan 3rd week 1969
51 51 Dusk Blue
715- Dark Blue interior
X33- Z/28
Non Matching # CE Code 302 Replacement Dated March of 1969 block casting # 3956618
Heads and intake NOT correct
Muncie 4 Speed
12 Bolt Rear end replaced
Correct 4 Multi leaf springs
4 Speed console with gauges
Cowl hood and rear spoiler is not factory they were added in the late 70s
All gauges work including oil pressure, gas gauge, amp guage, and water temp
correct working tach. Lights wipers and signals work.
Horn, reverse lights, clock and dome light NOT working.
Correct jack still in trunk
My family owned this car from approx 1978-1982 then it was sold to the next family who owned it for last 34 years!!
This Z has been setting for years We gave it a quick check out all the fluids breaks etc. I have driven it around
town and back an forth from work to home the last couple days but due to its age I'd highly recommend it be
trailered home by the next buyer until it can be further inspected.
This car needs a total restoration but it's all there. The floors, trunk frame are solid and look great. It was
repainted sometimes in the 80's and looks like it was done in the back yard and is a horrible paint job and body
work. It appears to have some rust in the bottom of both front fenders and both quarter lips. But it's still a real
Z in an affordable price range that you can restore later! To fix this car properly I would replace both quarter
panels and both front fenders.