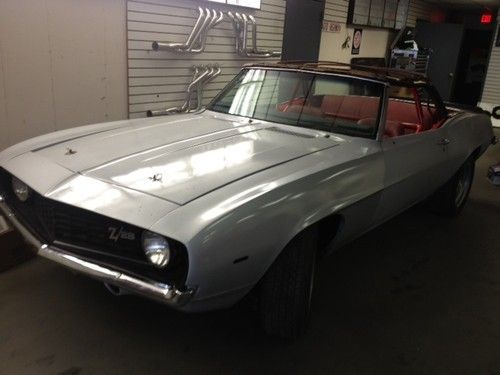 This 1969 Camaro is highly modifed all the way around. A subframe from a 2nd Generation Camaro has been swapped in for improved suspension geometry, braking, and better exhaust to steering box clearance. The floor has been reinforced, and the car effectively has a full frame, making it much stronger than the typical convertible body. The rearend is a 9" Ford with Wilwood NASCAR-style disc brakes. The car has a roll bar, and a circle track style fuel cell. The previous owner was planning to race this car in vintage racing classes. It is set up for a manual transmission. There is no engine or transmission included. The vehicle has power 4 wheel disc brakes and power steering, and comes with 16" Chevy rally wheels with flat center caps. A Griffin aluminum radiator (removed when the engine was pulled) is also included.

The car overall is solid, with no rust. This car started out as a coupe, and was made into a convertible using mostly original GM convertible parts. All inner structure for the folding top, the windshield frame and pillars, and all other necessary bracing from the convertible donor was added to this car to create a convertible. A top frame is included, but it does need repair or replacement (rust). Everything fits well, and the car is functionaly the same as any factory-built convertible.

Car is being sold on a "best offer" basis. The car does not have a title (not required in GA), but a bill of sale will be provided. Mileage is unknown.The car is located in Acworth, GA, and is available for inspection during regular business hours Monday-Friday 9am-6pm, or by appointment.