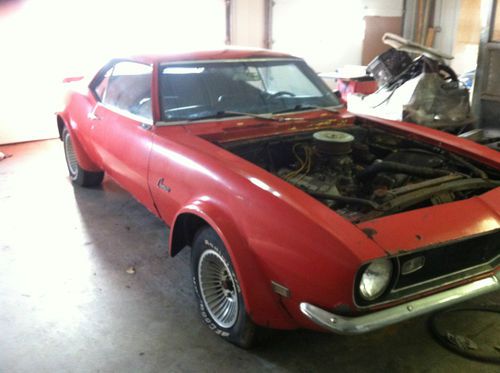 1968 Chevy Camaro, ( barn Find )  Car has been in storage last 21 years.  car is as is, car was parked in running condition. car is said to have a Built 350 was a Muncie 4 spd tranny. This is a COMPLETE car, an excellent  project ( as with most listed they are all disassembled )
this car is complete.  This car is in need of a full restoration, Body, motor,interior complete!.  Camaro was in my barn for last 8 years, and due to possible collaspe, i had pulled it out, and have too many projects started to tackle another. As to body, fenders, quarters, and doors need some work but are useable, hood , and decklid are junk, trunk floor is good, rockers are good, drivers floor has a hole but all else appear to be good, lower core support has some rust.  other than pictures, this is all that I know.
Thanks for looking, Good Luck