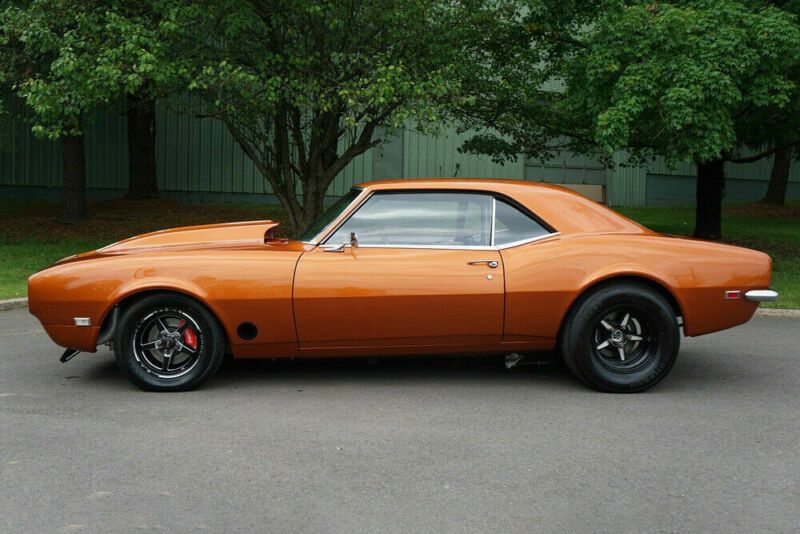 This insane 1968 Chevrolet Camaro was modified under previous ownership and is equipped with a twin-turbocharged
6.0L V8 reported by the selling dealer to produce approximately 1,000 horsepower. Additional modifications include
an integrated intercooler, Tial wastegates, 10-point roll cage, custom digital instrumentation, Wilwood disc
brakes, Hurst shifter for the Powerglide two-speed automatic transmission, and more. The body was repainted in GM Atomic Orange. Additional features include a cowl induction scoop, front chin spoiler, rear fuel cell cutoff switch, and
dual exhaust outlets exiting from the front quarter panels. The paint and trim are shown up close in the gallery
below. Forged 15″ Weld wheels with Classic all-season tires sized 165/90 are fitted up front, while a set of
15″ Billet Specialties wheels with 275/60 Mickey Thompson racing radials are mounted at the rear. Wilwood disc
brakes feature 4-piston calipers at all four corners. Rack and pinion steering is equipped. The cabin features
factory bucket seats trimmed in black with a color-matched dash, carpets, and TMI headliner. The integrated
10-point roll cage is shown up close in the gallery below. A ceramic-coated Budnik steering wheel featuring a
partial leather wrap is mounted to a custom Ididit steering column, and a Hurst floor shifter has also been added.
The custom carbon fiber instrument panel houses a Holley gauge cluster as well as a pair of digital air/fuel ratio
gauges. The digital odometer shows approximately 600 miles since completion of the build, with total chassis
mileage unknown. The LS-based iron block V8 features 317 aluminum cylinder heads and is equipped with two 62mm Borg
Warner turbochargers. The engine is reported to be capable of producing 1,000 horsepower at the crank while running
13 pounds of boost on 93 octane fuel. Additional details of the build include:
Custom Lil John Motorsports camshaft
Chrome-moly pushrods, springs and retainers
Oversize exhaust valves
Tial wastegates and blow off valves
Intercooler
Holley high-ram intake
Edelbrock throttle body
80 pound fuel injectors
American Autowire wiring harness