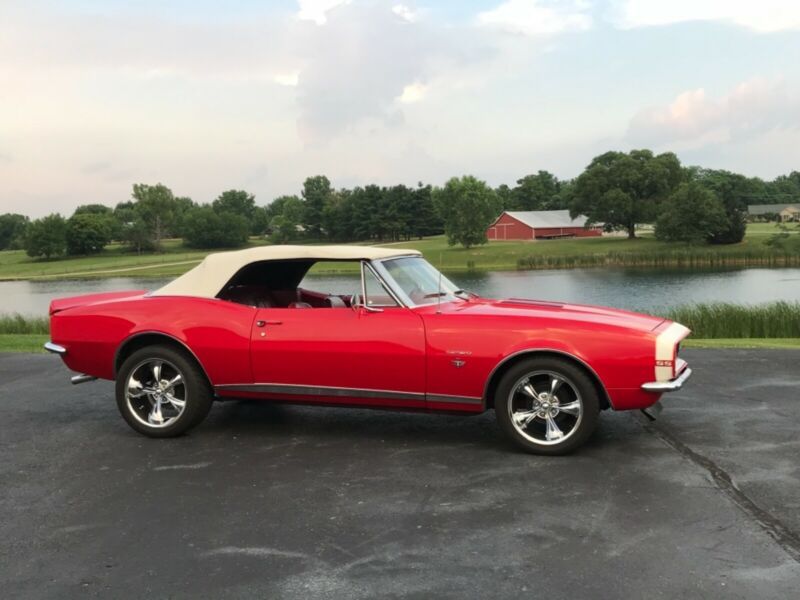 1967 RS SS Camaro Convertible.Lets start with the obvious. Someone at some point did a few things to this car to change up how it was originally
ordered. First off they replaced the front RS front end to a standard SS grille. The RS taillights and back ups
are still there. Second this car was originally a Black RS SS ordered with red deluxe interior which I have been
told was a very rare color combo. As you can see it is bright red with the original red deluxe interior. The
color is a very eye catching color combo as you can see. The white top is new and the paint is very nice on the
car. This car runs and driver very nice. A car that I am comfortable driving anywhere. It runs and drives great
and very dependable. The car has new 18 and 20 inch Riddler rims on it that really make the paint pop. No rust
anywhere as well no bubbles etc that I have seen or found. All the chrome is nice on the car as well. The car has
a 350 engine and 350 turbo transmission. Not to much else I can say but a super nice car that gets attention where
ever I drive the car or cruise too. I can email or text pics and videos if you are interested. If you are a
serious buyer you can call me at 260-582-9296. I have 1 other RS SS 1967 Camaro Convertibles, 67 RS SS 427 speed
Camaro, 69 Z28 Camaro, 79-80 Z28's, Trans Am's 1970, 1973, 1976 SE Bandit 455 4 Speed super rare, 2 79 Bandit SE
Trans Am's 1 is 4 speed I might be listing some of these as well.