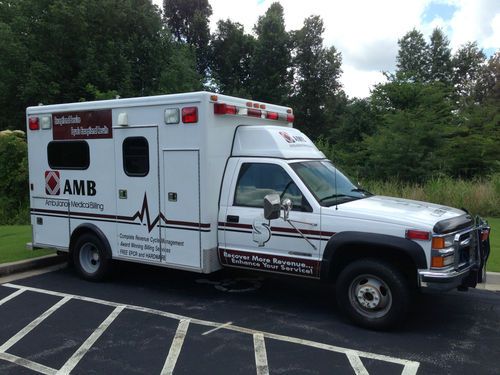 Condition: Used: A vehicle is considered used if it has been registered and issued a title. Used vehicles have had at least one previous owner. The condition of the exterior, interior and engine can vary depending on the vehicle's history. See the seller's listing for full details and description of any imperfections. ...
IF YOU ARE SEEKING A HIGHWAY SUPPORT TRUCK, A PORTABLE HUNTING LODGE, PARTY WAGON OR A SOLID START ON A RECREATIONAL VEHICLE BUILD OUT...LOOK NO FURTHER!!!
SUPER CLEAN 1999 CHEVROLET 3500 4X4 WITH AMBULANCE BODY.  59,000 MILES.  ORIGINALLY BOUGHT FROM A COUNTY AMBULANCE SERVICE FOR TRADE SHOWS AND NO LONGER NEEDED. BEAUTIFULLY MAINTAINED BY FORMER GOVERNMENT OWNER.  EXTERIOR PAINTED FOR SHOWS, NO CHANGES TO ORIGINAL INTERIOR.  BOSS SAYS GET IT OFF THE PARKING LOT, MAKE AN OFFER AS SOMEBODY IS BUYING THIS THING!!!