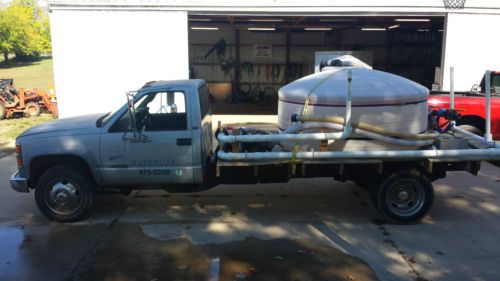 Condition: UsedA vehicle is considered used if it has been registered and issued a title. Used vehicles have had at least one previous owner. The condition of the exterior, interior and engine can vary depending on the vehicle's history. See the seller's listing for full details and description of any imperfections.Seller Notes:"Drivers side mirror broken, and check engine light on. See description"

As pictured, this truck was built to water a motocross track.  It has a 3" pump plumbed in, that has 2 separate ways to spray water.  One out the side and 2 outlets out the back as well as a 2" firehose on the side.

The side pressure outlet will shoot water about 50-60' out in a 20-25' spread.  The rear sprayers work approximately the same.  Valves can be reached by the driver so it can be operated by one person.
Comes with everything shown: 2 3" pumps, one plumbed in and one fill pump with all hoses needed.  Pumps have less then 3 total hours on both pumps, they are like new.  We built the truck for my personal track, and for health reasons I have to stop riding.
1000 gallon tank and fill pipe.  All quick connect banjo type fittings and valves.
Truck itself is as shown, its not the prettiest thing in the world, but I do have all maintenance records since it was new.  It has a check engine light on at the moment and runs a little rough, I was told its just a O2 sensor, but I have not looked into it.  It runs and does the job that I needed it to do.  The Drivers side mirror is broke.  Transmission and all moving parts all work well, it needs nothing but a tune up and its a perfectly running truck.  The hood latch cable is broke, so you have to manually operate the hood.
If you win the auction, I would like the truck picked up within a week of auction close.
There is no reserve, the starting price is LESS then I have in the pumps and fittings alone!!!