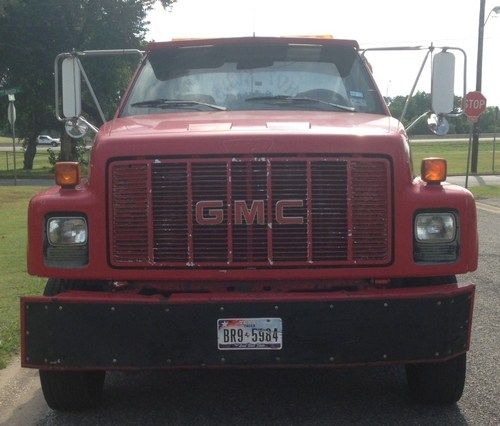 You are bidding on a 1993 GMC Chevrolet Kodiac C Series Tilt Flatbed Wrecker with a Caterpillar 3116 Diesel engine. The truck is sitting right around 145K miles. This truck has a freshly rebuilt 6spd manual transmission... 4700 worth of documented work done 1 week ago. This truck runs and drives perfectly. As you can see from the pictures the paint is a little rough and the truck definitely needs a set of tires. The tilt bed is in working order, although some of the hydraulic seals are in need of replacing. All of the hard and expensive work has been done to this truck, it simply needs a little TLC and it will be ready to go to work. We are a licensed dealer. The truck can be viewed at Cowboys Autoplex, 1001 Sam Rayburn Pkwy Sherman, TX. Short, Sweet, and Simple description but if you have any other questions or need further information on the vehicle feel free to call (903) 819 6523 any time or email me and I will be glad to help you.