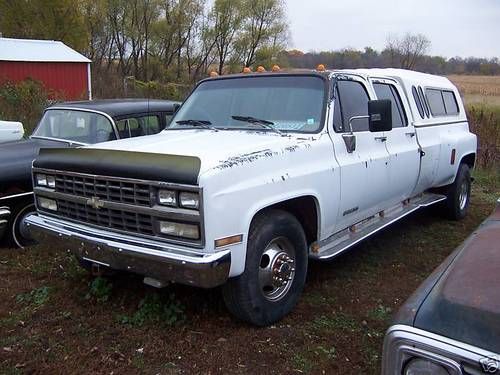 Condition: Used: A vehicle is considered used if it has been registered and issued a title. Used vehicles have had at least one previous owner. The condition of the exterior, interior and engine can vary depending on the vehicle's history. See the seller's listing for full details and description of any imperfections. ...
1990 Chevy c/k 3500 dually crew cab

Engine is a 454 V-8 fuel injected that runs good with a turbo 400 transmission which  works awesome.


The body is very straight and 100% no rust. The paint is missing on the top from the Arizona sun you can see from the pics.

It is very clean, the floor boards under the truck don't even have a surface rust on them. The truck was used to pull a boat to the lake and a camper trailer down in Arizona.


Its never been on the road in Minnesota in the winter time because I have a  second truck which I use all the time.


The interior is in a good condition. They are usually dryed out from the Arizona but this one is ok with a little ware on the seats.


The topper will go with the truck. Just bring some clamps with you to hold it on.


If you have any questions please ask

I hope it will soon go to a new home and the owner will enjoy this 454 DUALLY as a much as I did.


If you don't want to pay for it, please don't bid that will save me ebay fees and trouble.

I reserve the right to end this auction early because its for sale locally.