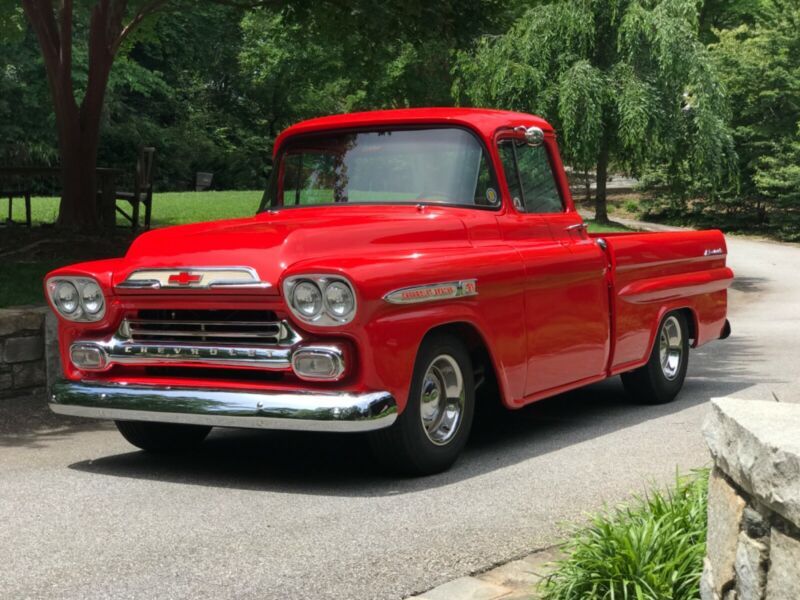 This stunning 1959 Chevrolet Apache 3100 pickup received a ton of time and money. It's a labor of love that has
resulted in a high quality, exceptionally clean, classic truck that delivers muscle car V8 performance and modern
comfort. It's the kind of pickup you'd build if you had the time, patience, skills and money, but instead, this is
turnkey ready so you can start enjoying it immediately.
Chrome bumpers, a bright grille, and those trick parking lamp housings dress up the truck, taking it beyond a mere
tool, and into the realm of cool custom. And no vintage pickup is complete without a beautifully finished wood bed.

Be prepared for plenty more custom work when you open the door. It starts with the custom tan leather bench that
has been stitched so the driver and passenger can have individual comfort. The door panels do a great job of mixing
the upholstery and exterior colors so that the whole atmosphere flows nicely, from the tan seats, to the red dash.
Your left hand will love the Grant steering wheel with glossy wood rim, and your right may never want to leave the
Lokar-style floor shifter. You get a Classic Instruments gauge package, and while that already provides you with
plenty of info, this custom build wants you completely informed. Thus, there's a tach mounted on the tilt steering
column, as well as a trio of auxiliary readouts under the dash. This pickup was built to be good to you and your
friends with added comfort features such as ice-cold R134a air conditioning, supplementary insulation on the
firewall, and a vintage style AM/FM stereo with an auxiliary input for you modern music player hidden in the glove
box. Sound proofing and has been added as well as power windows but the existing handles are utilized so as not to
disturb the aesthetics.
With so much invested in the interior and exterior to make this a great car show companion, you better believe thee
was plenty of consideration under the hood, too. The crate 350 cubic-inch small block looks fantastic with the
Chevrolet Performance air cleaner and matching valve covers, tidy wires, fresh hoses, and expensive polished
pulleys. But beyond looking great, this motor is built to be a true all-around performer. It's a Chevy crate V8
that has been thoroughly gone through, and then added a mild cam, and a Holley Sniper Fuel Injection System with a
controller in the glove box that allows you to change the fuel delivery settings. There's only about 6,800 miles
on the whole custom build. So you know this enhanced V8 fires up easily, and thanks to the H-pipe Flowmaster
exhaust, everyone knows there's something special under the hood. But this Chevy's appeal goes beyond the motor.
You have an upgraded independent front suspension, front disc brakes, power steering, and a 700R4 four-speed
automatic transmission w/overdrive. Starting to get the picture on this one? It's the classically cool pickup you
can drive anywhere.