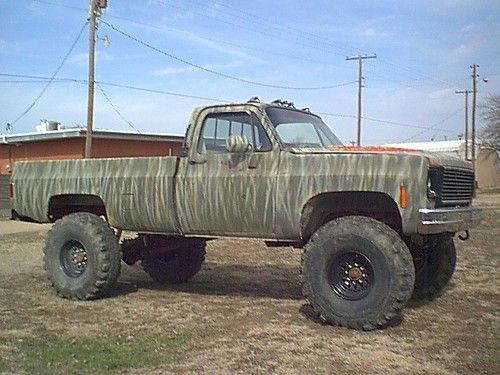 We are making room for some new toys. This is a 1975 3/4 ton Chevy 4X4. She sets much higher then it looks like in the photos. You can drive it as is and tinker with it as you go. It has a small block 400 GM V-8 with an automatic transmission. Both run fine. Starts right up every time. We have taken it along with other jeeps and four wheelers down to the river and had tons of fun. Carburetor just rebuilt. It as 42" swamper tires and 12 inches of lift. It has a clean Kansas title. Don't let the low starting price fool you, I have way more money in it then I want my wife to know . As you can see the camo. paint job was a $50.00 job and is in very poor condition. The interior needs completely redone. You can drive the truck around town but she needs tires balanced. They bounce pretty good over 45 MPH. Maybe more air would help with that. We always ran 20bls. , tires say 45bls. The worm gear in the steering box has some play and needs replaced. Can get the whole box at junk yard for $75. We just drove her in mud runs, rock crawling and  in river runs. She is ONE TUFF MUDDER. It fits on a regular car trailer but tight. I can email you my home # if you would feel better talking in person. I will not respond to a third party email address or send a second chance offer. Most of them are scams. Thanks for looking.

: ATT:   In one of the photos it looks like there are holes in the left front fender but that is not holes, thats where the camo paint is flaking off.