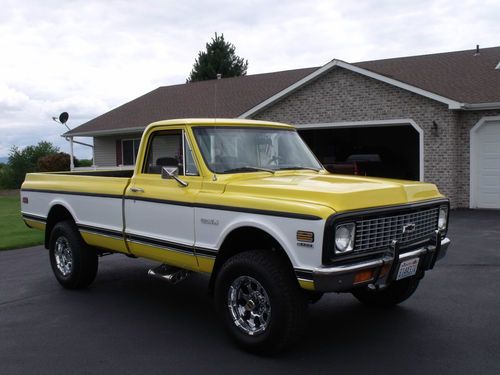 For Sale is a restored Chevy 3/4 ton K20 4x4 factory air, factory tach, triple tank. tilt  PS, PB with disc's in the front.  Motor is a BBC 402 NOM stock bore completely rebuilt, new edelbrock 750 electric choke, 3 inch exhaust, HEI.  Truck has perforamce chevy's dual electic fans.  Transmission is a 700r4 completely rebuilt to withstand the torque of a BB truck to the tune of $1700 with a manual 4th gear torque converter lockout switch.  NP205 transfer case completely gone through.  Truck was taken down to the frame, only the cab remained on during the restore, i did replace the body mounts new poly mounts.  Frame was fully cleaned and POR15'd.  Completel y new front suspention, including all new energy suspention bushings.  All new bearing, tie rods, ball joints.   New warn professional 3/4 locking hubs.  A/C systems was upgraded with classis air componets now running R134.  I removed the behind the seat tank and replaced the 2 saddle tanks with ABS 16 gallon tanks.  Each tank has it's own sending unit and is controlled by a switch on the dash.  The factory floor tank selector is still intact and works perfectly.  17 inch wheels with 33 inch Hankook all season radials.  Truch had a 1 inch lift, with no rubbing for bottoming isssues at all.  Paint and body work was complete when I bought the truck, the truck had never been in a wreck, the frame is without any damage and is lazer straight.  The rockers look to have been replaced, the paint is of very good quaility, buffs and shines really nice.  I would call it very good driver quality, it is close to show but there are a few small blems that keep it from 100% show quality.  I would rather under sell the truck then try to over state it.  Bed was shot with Raptor bed liner and is in excellent shape.  Interior has a very nice custom audio system, and newer chevy suburan middle seats have been fabed in.  Seats are very comfortable and enhance the ride of the truck.  The driver wind window is inop and the volt meter needs replace other than that the truck is and drives like new.  I wouldn't hesitate to drive it across counrty.  It drives and runs well enough to be a person's only truck, or it would make an execellent weekend warrior and show truck.  I build alot of first gen camaro's, this being my first truck, it was fun to build and the few times I haved taken it out I get more looks and completments then some of my 69 camaro's.  Truck has about 300 miles on it sense complete, barely broke in, and it drives nicer than it looks.