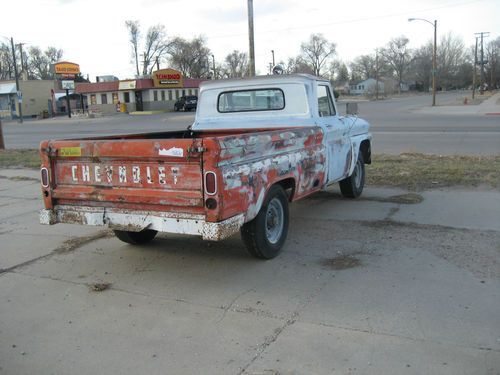 THIS A GREAT TRUCK FOR THE FARM OR RANCH A 1964 CHEVY 3/4 TON TRUCK.   THIS TRUCK WAS PUT TOGETHER BACK IN 1992 BY A LOCAL GUY HERE , HE REBUILT THE TRUCK USING PARTS FROM TWO TRUCKS. I BOUGHT IT FROM HIM WHEN IT WAS IN MY REPAIR SHOP ABOUT FIVE YEARS AGO, IT HAS A NEW BLOWER MOTOR, I REUILT THE CARB AND IT RUNS GREAT., ALL THE BRAKES HAVE BEEN CHECKED, KITTED ALL THE CYLINDERS AND REPLACED FRONT LINING, PACKED BEARINGS AND SERVICED THE VEHICLE.THE TIRES ARE DECENT WITH A LOT OF LIFE LEFT..  THIS TRUCK STILL NEEDS SOME WORK BUT IT STILL WOULD BE A GOOD WORKTRUCK.  IT WOULD SAY YOU COULD DRIVE THIS TRUCK HOME. THE TRUCK ALSO HAS A SPOTLIGHT THAT WORKS.