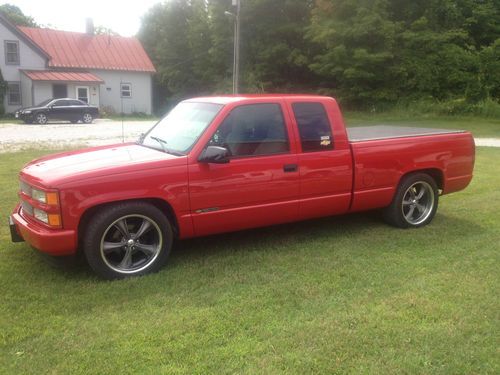 I have for sale a 1996 Chevrolet C1500 Silverado extended cab short bed, rear wheel drive Sport Truck. I purchased this truck down south a few years ago and have done many upgrades including: Lowered Bell Tech suspension, 20" Boss wheels with New Tires, Rear Differential gears (4:11) with Limited Slip, Flowmaster Exhaust, Hypertech programmer, Complete custom paint, and Low profile Tonneau cover. Truck has the original 5.7L, 350ci, V8 Engine, with 4L60E Auto trans which both work perfectly, Interior is mint, as is the Body. Needs absolutely nothing! Drive anywhere! Looks, Runs and Drives awesome! Hate to sell, but too many toys! Consider Car or Truck in trade, possibly 4WD ATV also.