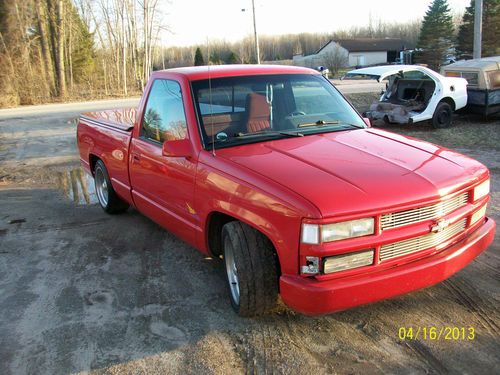 You are bidding on my 1988 Chevrolet c 1500 pickup.  this truck has served me well for the past 3 years and i have taken this to many shows from St. Ignace to Woodward.  i was planning on taking it on the hot rod power tour this year but since i had hit some hard times i have decided to sell her.  i have used her to go to work from Chicago and back many of times without any hassles. i not only used this truck for show but for work as well. so here what she has on her so far.

the truck currently has 155000 miles on her.  i have a list of 600 dollars in parts that i put into the truck which includes putting in an alternator, new starter, power steering pump, water pump, new ignition module, new rotor, and distributor and new lower ball joints.  the truck runs strong and the transmission shifts smooth.  but there are some things that it needs due to the age of the truck.  but is minor things that need to be done to make it perfect.  This truck has a lot of customization done to it also including being correctly lowered 2 inches in the front and 3 inches in the back with drop spindles, 2 inch lowered springs , and sport truck gas shocks all the way around. it has a fiberglass roll pan for a rear bumper, and a painted front bumper.  this truck also has a 98 front clip on the front including a green illuminated bow-tie in the grille.  there is a hard tonneau cover on the box as well as a bedrug carpet and altezza taillights.  the truck also has the SS 454 bucket seats and center console for the interior.
firstly, the body mounts for the cab and the box need to be replaced, secondly the shocks need to be changed out due to the loss of gas in them, it does need a set of tires as well.  the cruise control switch has broke of the turn signal switch and needs to be replaced as well but the cruise control still works. the AC also needs to be recharged. not to mention i had a careless driver in a Walmart parking lot bump into my grille and leave. needing a new grille, as well as some bodywork due to miscellaneous dents and rust.  but other than that this truck is ready for work or play or if you want a running driving project truck to take to car shows. it is all up to you.:)
The reserve is way lower than the buy it now price so rest assured you can own this at a very affordable rate.  i also have a second set of wheels for the truck for 300 bucks if you are interested.:)
i hate to see her go but i have to make room in my garage for my new business.  but my loss is your gain.  now if you want me to deliver her to you i  can do that for 1.75 cents a mile.  i also have the right to end the auction early cause it is for sale locally.  if you have any questions you can get a hold of me at 989 513 4237 and ask for Ethan. or if you want to email me your questions then i'll be more than happy to answer them for you.