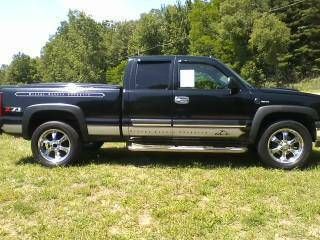 A beautiful black truck that has been customized with Orange County Choppers. This is a certified custom vehicle that was done by a conversion company in Indiana. We've never seen another one like it!! 2005 Chevy Z-71 extended cab pickup with OCC custom leather interior, hard tonneau cover, grill, hood scoup, and graphics. The pictures do not do this truck justice! The truck has 153,000 miles. The V8, 5.3L engine has a lot of horsepower and runs strong. Check out these other details:Seats 5Towing packagePower windowsPower locksPower drivers seatPower mirrorsCruise controlA/CRear window defrostDual climate controlnerf barsOnStar capabilityxm satellite radio capabilityDual air bags (passenger air bag turns off depending on the weight of the individual sitting in the seat)Multidisc CD player with premium Bose sound systemTilt steeringTinted windows

The truck has been detailed inside and out and is very clean. No rust. We have all the maintenance records since October 2011 when we purchased it. It has been well maintained with regular oil changes and tune ups. The drivers seat is worn on the edge and may need future repair. There are two center caps missing that can be reordered online. This is not very noticeable but wanted to mention it. We love this truck and would be keeping it except that we are down to one income and just can't afford to keep it.
The listing price is what we owe on it and less than what the current value is for this customized truck.