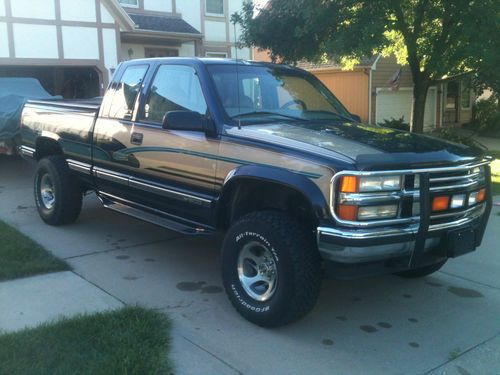 Condition: UsedA vehicle is considered used if it has been registered and issued a title. Used vehicles have had at least one previous owner. The condition of the exterior, interior and engine can vary depending on the vehicle's history. See the seller's listing for full details and description of any imperfections.Seller Notes:"The air conditioner has just recently stopped working. I upgraded the fuel tank and get an occasional check engine light that has no effect on the operation of this truck."

Truck is in great shape for 15 years old. Does have some dents, dings, and normal wear. The hood has a slight wrinkle that is not very visible. Note the driver seat and rest. They could use some immediate attention.  The interior is Flexsteel leather.  A nice seat cover would work for now.

Truck has a Raptor 700 from PATC.  You should google that and see what that means!!!!!

I will be adding a video of truck in near future. She is one good truck and would be great for detailing out and restoration.

Engine is solid and has Gibson Headers with Magnaflow stainless muffler and tips. Sounds nice.  I have owned the truck since 2001. I am the second owner.

Truck is for sale locally. I don't think it will last the 7 days.