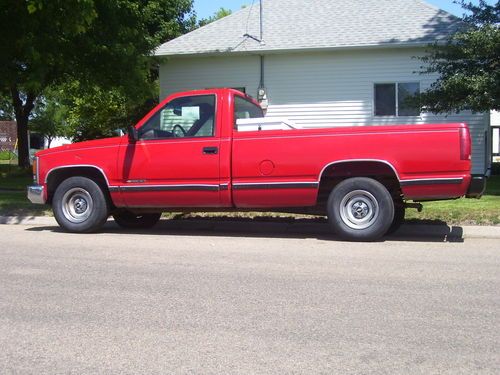 I have for auction this 2 wheel drive 1996 Chevy 2 wheel drive W/T with less than 116000 original miles. Clean older truck with the 4.3L Vortec V6 engine, automatic transmission, tilt, cruise, a/c (non-working), rubber floor mats, AM/FM radio, near new Delta crossbed tool box w/ keys, decent rubber, new interior and exterior door handles on the drivers side and the glass is good. The driver side seat has the typical holes where the driver entered and exited the cab, the tailgate has a ding but still opens and closes easily, the inside of the bed is scratched and skinned up but no major dents, the left fender has a dent but all other sheet metal is near perfect with NO RUST.

ADDITIONAL PICTURES AVAILABLE UPON REQUEST
REPLACEMENT SEAT AVAILABLE BUT NOT INCLUDED IN THE AUCTION
A/C REPAIR AVAILABLE ALSO BUT NOT INCLUDED IN THE AUCTION PRICE
ASK ANY QUESTIONS YOU MAY HAVE PRIOR TO PLACING A BID
AS WITH ALL MY AUCTIONS I PREFER THE BIDDER OR HIS REPRESENTATIVE VIEW AND TEST DRIVE THE VEHICLE BEFORE BIDDING, SAVES A LOT OF HEADACHES FOR EVERYONE INVOLVED DOWN THE ROAD. THERE WILL BE NO WARRANTY EXTENDED BY THE SELLER ON THIS VEHICLE.
$250 NON-REFUNDABLE DEPOSIT VIA PAYPAL DUE IMMEDIATELY AT AUCTIONS END