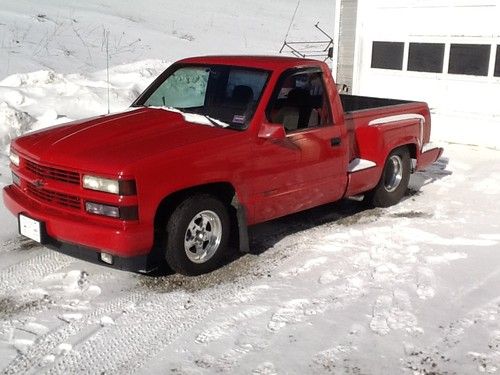 Thanks for looking at my auction. I built this truck as advertising for my business. Now its time to build a new one so someone gets a good deal. It is a true SS model came factory with a 305HO. Well that was ok but being as I was building it pro street needed a little more fun under the hood. Pulled the 305 and built a 468ci Big block.

Rear end: 10bolt shortened, Strainge SS axles installed, all new bearings, New 4:11 gears, new limited slip, all new brakes around. New u joints, new 4 link frame kit, new heim joints, New aluminum 15 gallon fuel cell with sending unit, new electric fuel pump, new aluminum fuel line, new bipass preasure regulator, Ok on this part, the fuel pump is brand new but for some reason it is noisy, I put one on and it was noisy so pulled it sent it back to the company and they sent a new one. This one is still noisy works fine never been an issue but just want to make it clear, don't know if its just the brand or what.

Front end has new 3" drop springs and I have a set of 2" drop spindles that go with it just need to be put on. New front runner tires and pro star wheels, 33-21-15 mickeys on back on pro star wheels, these are not new but have 3/4 tread or better and wheels need to be polished.

Truck has 1700 miles on it since completed. Original odometer reads142076, But this is what truck originally had. Has factory SS cowel hood. Needs the interior finished has bucket seats, but a nice set of racing seats would be good. This truck is street legal in my state but check with yours to make sure it is there. I have not raced this other than playing at the lights. I built it to drive down the street and advertise. I have been down the interstate at 85 and it rides like a dream. Truck is a blast to drive and really turns heads. It could be raced with a little modification, needs 4 link adjusted I have it set for street driving so it really doesnt launch as hard as it could. If I where to race it I'd change to an automatic. 5 speed was what truck was when I got it and since I was building it as street I wanted to just leave it the way it was and play.

This is a no reserve auction and the hi bidder wins. I have about 10k in this it is ready to drive not a roller. drive it home if you like. I'd head for florida without hesitation thats how nice this goes down the interstate.

Please feel free to ask any questions. I will reply to all.