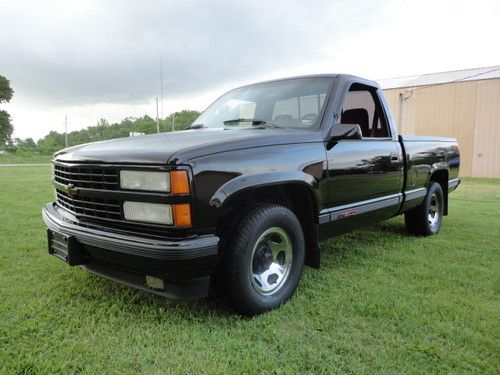 Up for sale is a super nice, super clean, all original 454 SS truck. Same owner last 13 years. Local truck, well kept and maintained. Only thing not original is the flowmaster muffler. Body is in great shape and interior is super nice as well. Truck showing 70,000 miles, can't know for sure but speedometer works perfect. Truck is a 23 year old truck so sold as mileage exempt. Truck is as nice as you will find and plenty nice for local car shows and cruising. Body is straight, paint is slick and the engine has 7,000 miles on a complete rebuild. Timing chain gear broke last year so the motor was taken out and completely gone through top to bottom. Has a new ac compressor and air blows ice cold as well. Trans is a 400 turbo with 3:73 posi rear axle all factory. Truck has no rattles, no squeaks. Look at pics and call if interested before bidding/buying. Call 573-576-7228 anytime 24/7. For sale locally so I reserve the right to end auction early. Thanks for looking..