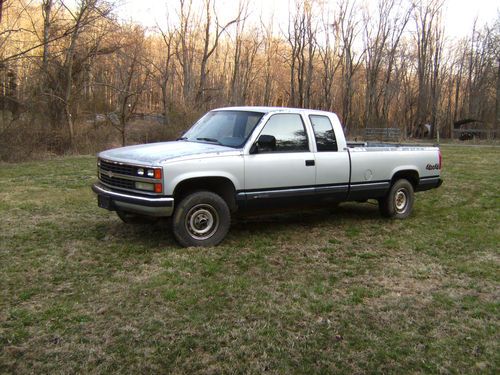 You are bidding on a 1989 Chevrolet 1500 extended cab Pickup Truck. It is 4 wheel drive. The tire size is LT245/75R16. There is some rust spots on the passenger side cab which one spot is bad. It is a one owner truck. It has 129,706 miles which are accurate. The tail light on drivers side rear is chipping but is fully intact. The drivers seat is torn but has a seat cover on it. Look at the pictures. It has an automatic transmission and has no misses when running. It has a new fuel pump and fuel filter. It has a new tuneup which includes spark plugs, spark plug wires, and distributor cap. It starts up with no problems and has no visible leaks.You are buying the truck as is. It is located in Boston,Va. Culpeper County