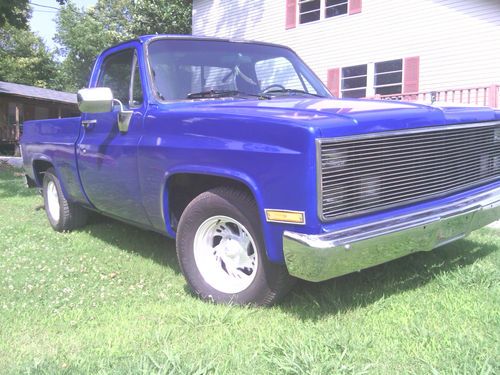 This is a 1987 Chevy 2 wheel dr . It has a  almost New 350 EFI with 10,000 miles, almost New 400 trans with 10,000, New paint, New wheels, New Tires, New headliner, New Breaks, New Shocks, and the seat has been redone. this is a very cool truck runs great with plenty of power. The truck is not perfect but very nice.I am very awear of the value of this ride and although it's not perfect anyone would be proud to ride in it. text offers too......662-710-2947....DON'T waste my time or yours by low balling.  Any and all questions should be asked before you bid. if you bid you are agreeing that all questions have been answered to the best of seller knowledge and the bidder excepts the responsibility of the truck and the terms of the add.