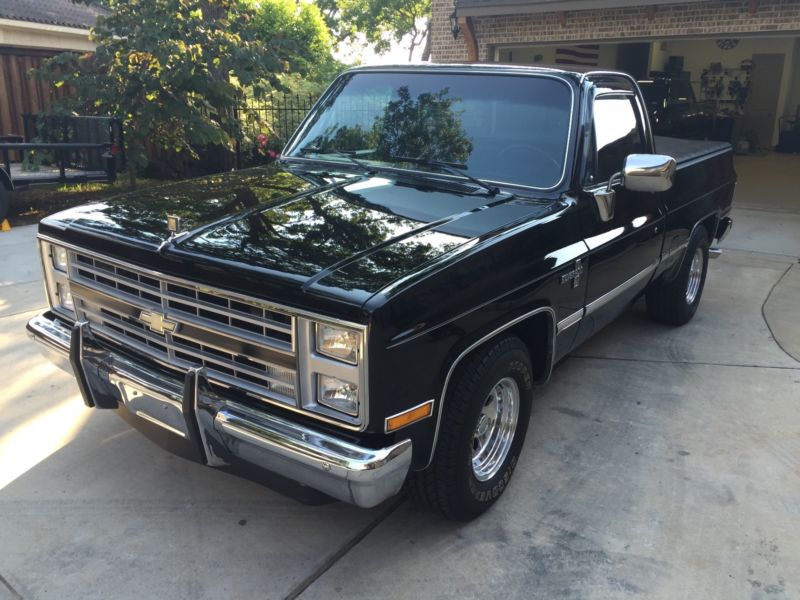 If you have any questions feel free to email: carmelitacmmeltz@trekkies.org .

I am selling My 1986 Short Wheel Base Silverado. Original Miles 68k, and was restored by a Japanese GM Employee
Master Mechanic Tool and Die Engineer. He was here on a work Visa and restored this truck for fun. When he Left
Back to Japan, I bought it from him. The Frame off restoration was meticulously Completed over a 10 year period and
has less than 400 Miles on full restoration. He spent all his off time for 10 years working on this beautiful
truck. This truck has almost everything new down to the nut and bolt. No expense spared, all parts you can't see
are new too. Restoration was done by the book, no backyard work done. Complete and full overhaul of the engine and
transmission. This truck runs better than new and truly belongs in a museum. All Parts came straight from the
Factory he worked at, and was painted there too. The reason I'm selling,,,,,I'm afraid to drive it, It's that
Nice. Linex Bedliner, all new tires and wheel including original Rally wheels and tires, all new windows, new
grill, new bumpers, new body mounting, HID 600k Headlights, Led tail Lights, All new cooling components, Including
an electric radiator fan, New Air-conditioning Ice cold air, Both Fuel tanks are new, all original emblems,
original mirrors, New soft tonneau cover, original gauges and everything works, original stereo, Transmission
overhauled with TCI overhaul kit, Brand new suspension, all new bearings and bushings, All new brakes, Trik flow
aluminum heads, Emission control, The list goes on and on. This Master Engineer painstaking restored this truck by
the book , it's unbelievable.