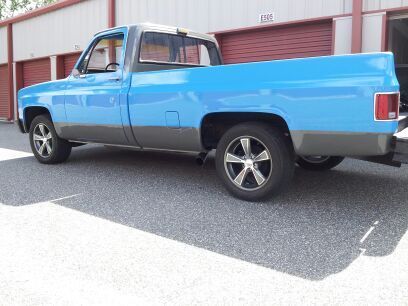 Condition: UsedA vehicle is considered used if it has been registered and issued a title. Used vehicles have had at least one previous owner. The condition of the exterior, interior and engine can vary depending on the vehicle's history. See the seller's listing for full details and description of any imperfections.Seller Notes:"TYPICAL WEAR AND TEAR FOR A 28 YR. OLD TRUCK"

I TRADED FOR THIS TRUCK RECENTLY BUT AM NOW MOVING AND WON'T HAVE THE SPACE FOR A 3RD VEHICLE - SO MUST SELL BEFORE MOVING.

FIRSTLY IT SOUNDS GREAT. IT'S BEEN RECENTLY PAINTED BLUE / GREY WITH SUMMIT RACING GREY HUSTLER 431 5-SPOKE WHEELS AND NEWER YOKOHAMA TIRES.  THE PREVIOUS OWNER PAINTED THE TRUCK, MATCHED THE GREY TO THE WHEELS, PAINTED THE BUMPERS BLACK, PUT THE WHEELS ON, INSTALLED NEW SUMMIT RACING HEADERS / EXHAUST, INSTALLED A NEW SOUNDSTREAM CD / DVD / MP3 STEREO (I HAVE FOUR 6X9 ROCKFORD FOSGATE SPEAKERS THAT WINNING BIDDER CAN HAVE - CD WORKS WITH EXISTING SPEAKERS THOUGH) - FINISHED THE BACK OF THE TRUCK WITH SOME KIND OF RHINO LINING AND REMOVED THE TAILGATE.  IT WAS GOING TO BE USED AS A MOTORCYCLE PICK UP TRUCK (I HAVE A 8FT ATV / MOTORCYCLE RAMP FOR THE TRUCK WHICH I WILL BE WILLING TO WORK OUT SOMETHING WITH THE BUYER IF THEY WANT IT).  IT HAS A BULLY TAILGATE NET (INCLUDED - BUT NOT IN PHOTOS).

THE PREVIOUS OWNER PUT A NEW RADIATOR IN (WITH COOLER), NEW WATER PUMP, NEW BILLET GRILLE ON THE FRONT, NEW IGNITION BARREL (APPARENTLY KEY GOT STUCK IN THE BARREL AND COULDN'T BE REMOVED), INSTALLED LARGE CHROME DUAL EXHAUST TIPS THAT COME OUT THE SIDES OF THE TRUCK JUST FORWARD OF THE REAR WHEELS, THERE'S A NEWER BLUE BENCH SEAT, NEWER BLUE HEADLINER.  POWER WINDOWS / LOCKS WORK - GAUGES LOOK LIKE THEY WORK BUT HAVE NOT BEEN TESTED FULLY (THERE'S A GAUGE UNDER THE DASH WHICH ISN'T WIRED AND I'M NOT SURE WHAT IT'S FOR).  THIS HAS DUAL GAS TANKS - BUT PREVIOUS OWNER ONLY USED RIGHT SIDE TANK.

400 TURBO TRANSMISSION JUST INSTALLED, AND I WILL GIVE BUYER THE OLD 400 TRANSMISSION (THIS WAS RECENTLY REBUILT - LOOKS CLEAN - BUT HAD AN ISSUE GOING INTO 2ND GEAR - HENCE THE OTHER TRANSMISSION BEING INSTALLED).  TRUCK IS BY NO MEANS PERFECT, IT IS NO WHERE NEAR A SHOW TRUCK - IT WAS JUST BUILT TO LOOK GOOD AND BE NOTICED GOING DOWN THE ROAD (WHICH IT DOES - I STOPPED TO PUT GAS IN IT AND EVERYONE WANTS TO TALK ABOUT IT OR COMMENT HOW COOL IT IS)...THE BODY HAS A NUMBER OF SMALL DENTS, THE PAINT IS NOT PERFECT (LOOKS GOOD FROM A DISTANCE), CRUISE CONTROL / WIPERS NOT WORKING (DON'T KNOW IF THEY'RE NOT HOOKED UP OR DON'T WORK).  NO AC - BUT CAN BE EASILY ADDED TO THESE OLDER TRUCKS.  FAN SEEMS TO BLOW UNDER THE DASH (HAS COOLED TRUCK IN SUMMER).  I WAS TOLD THE STARTER WIRING IS CLOSE TO THE HEADERS BY THE MECHANIC THAT PUT IN THE TRANSMISSION AND SHOULD BE MOVED AT SOME POINT (NOT SURE HOW SIMPLE THAT IS).  CURRENTLY AT MY HOME WITH A FLAT BATTERY FROM SITTING (I WAS TOLD BATTERY WAS NEW).  WHEN PICKING UP BRING JUMPER CABLES! DOES RUN THOUGH - AS WITH MOST OF THESE 350 CHEVROLETS THEY ARE CHEAP TO WORK ON AND LAST FOR A LONG TIME. MILEAGE OF APPROX. 88,000 IS BELIEVED TO BE TRUE - BUT NO WAY OF KNOWING. IF I WAS GOING TO KEEP IT I WOULD SWAP OUT THE CARPET AND MAKE SURE THE WIPERS WORKED.

I DON'T KNOW MUCH ABOUT THE HISTORY OF THE TRUCK AND AS MENTIONED IT WAS A TRADE AND I HAVEN'T HAD THE TIME TO DO ANYTHING ELSE TO THE TRUCK OR CHECK ANYTHING...ALL I KNOW IS THAT IT SEEMS TO RUN WELL (KICKS YOU BACK IN YOUR SEAT WHEN TRANSMISSION SHIFTS UP).  OBVIOUSLY SOLD AS IS WITH NO WARRANTY IMPLIED.  BUYER TO PAY WITHIN 7 DAYS OF AUCTION CLOSE WITH $500 DEPOSIT WITHIN 24 HOURS OF AUCTION END.  HAPPY TO HELP WITH SHIPPING - BUT AT BUYERS EXPENSE.  TRUCK IS CURRENTLY IN CENTRAL FLORIDA JUST NORTH OF ORLANDO.