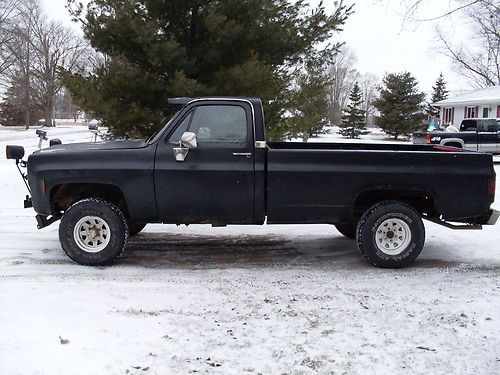 this is a 1973 chevy 4x4 long box. truck has a nice runing 350 2 barrel the transmission shifts nice and works great the 4x4 works great . the trucks lights all work turn signals all of them work the truck has new fender squirts installed in front fender inside. the box beams under neath r rusty trucks heater only works on low tires r better than half tread still in good shape the truck also comes with a western snow plow the pump quit working but i have a used one on the way the snow plow is in nice shape been using all winter until the pump quit the other one should be here this weak truck goes down the road good has a little bit of vibe around 50/55 would make a good project or just a great wood hauler