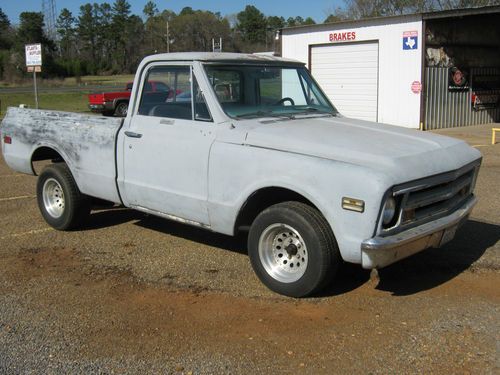 69 chevy pu with 68 front cap.350 motor runs good cam has a nice lope to it,turbo 350.already has 5 lug front end and rearend.power steering has a leak and rear seal on trans has a leak.rear tires are in good shape front ones have tread but have dry rot cracks.has new front end parts that go with truck but are not installed ball joints,tie rod ends,ect....I have gas tank out and cleaned but will be back in truck this weekend just have to get new o ring for sender.no tailgate there is a black bench seat with no tears that is in it but not in pics. this trucks been sitting for about 6 years.motor is suppose to be low mileage but i dont know for sure.no test drives I dont have liscense or insurance on it.its being sold as is.email any questios,thanks