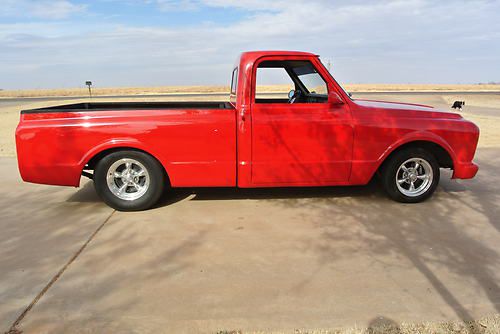 This is a very cool Customized 1967 Chevrolet truck. There are a few minor flaws in the paint but otherwise its in great shape and looks, runs and drives really good.
Looks awesome and catches all the eyes!! The pictures tell the story and I have a few more I can send. Email me and I will send the link.
Here is a list of a few of its cool features:
New carpet
Custom door panels
Billet door and window handles
Billet accelerator pedal mechanism
GT Grant steering wheel
Custom dash
Pro Comp speedometer
Auto Meter gauges
Auto Gauge tach
B&M Shifter sitting on a custom wood console
Custom wood headliner
Custom two tone wood bed floor
American Racing chrome wheels with nearly new tires
Electric solenoid door openers with remote

Feel free to email with any questions or for the link to additional pics.