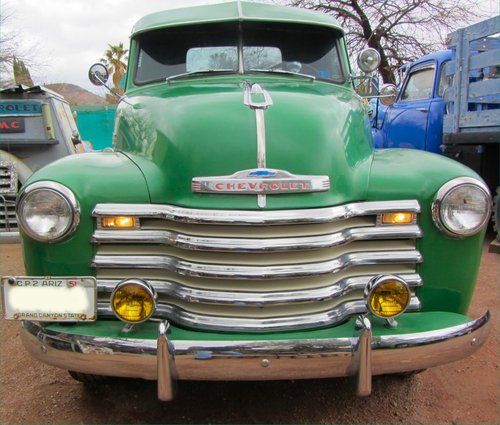 This truck came off the Van Nuys California GM assembly line . Spent its first 29 years in Southern California & has spent the last 33 years living the easy life in rust free Arizona.
Truck has gone through several restorations over the years. Virtually every part has been replaced or rebuilt .
35 years of parts & service receipts are available for inspection.
Was featured in This Old Truck { now Vintage Truck} magazine in January of 2000.
Has been well maintained & cared for over the years. Has been in storage in our shop in Arizona for over 10 years & driven only occasionally.
We hate to let it go but, we just don't drive it enough anymore & it is time to thin out the collection & let someone else have some fun with it.
The paint is starting to show some signs of age but, still in nice shape.
Truck runs & drives fine. Motor runs like a top.  This truck is a blast to drive.
Still retains the original 216 motor it was built with. Motor rebuilt & very few miles have been put on it since.
4 speed transmission ,  H.D. 11" clutch,  original 6 volt electrical system, original 1951 doors switched out for 1952 push button doors. New Michelin commercial radial tires, gas charged shocks, Re-arched springs, 20 gallon under bed auxiliary gas tank are just a few of it's features.
This truck is loaded with original GM & period correct options and accessories !
Orig. radio
Orig. radiator fan shroud
Orig. Fresh air heater
GM Guide day/night rear view mirror
Cig. lighter
Steering column mounted flashlight
Hull compass
Folding suicide knob
GM Guide traffic light viewer
GM Inside sunvisor vanity mirror
Siren
GM under dash tissue dispenser
Glove box lamp
Outside sunvisor sunshade
GM dual Hi/Lo horns
GM Radiator overflow tank
GM Windshield washer {not operational}
GM Washer spare fluid jar
AC Oil filter  Fuel filter
H.D. truck option Oil bath air cleaner
Under hood lamps
Chromed hood center strip
"Cow tongue" GM accessory hood ornament
GM Guide 5 3/4" amber fog lamps
Front & rear bumper guards
Factory GM front sway bar
GM Guide combo  spotlight/rear view mirror
Door stainless vent shades
tinted side & rear glass
Door handle scratch guards
Vent window breezies
Running board step plates
Side mounted spare tire
Dual tail pipes with porcelain tips
Rear splash apron
GM Guide Cargo lamp
GM Guide Back up lamp
3rd brake lamp
Rear bed rail reflectors
Stainless wheel trim rings
Orig. 16" rims powder coated & pinstriped
Side bed rails with tie down hooks
It would be tough to build & equip this truck for less than the asking price.
We encourage you to come & inspect the truck yourself, or order an independent inspection.
$500 non refundable deposit due via Pay Pal within 24 hours of auction end.
Truck has a clear notarized Arizona title.  YOM Arizona license plates NOT included.
The only form of payment accepted is cash at time of pick up. We will store the truck at no cost for 14 days from end of auction.
Buyer is responsible for all shipping & transportation costs. We will work with your transport company with shipping logistics or we can help with arranging shipping services as we have numerous contacts that pick up & deliver vehicles nationwide.
Vehicle is being sold "as is" with no warranty expressed or implied.
If you have any specific questions.....Call 520-570-4824  during normal business hours {Mountain time}.