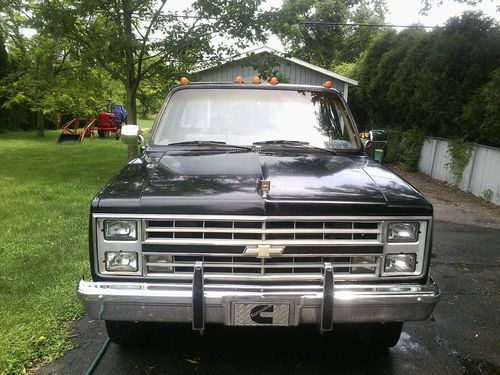 Truck is powered by a 4bt Cummins engine!

Transmission is a 400 turbo trans!

Also has a Milemarker dual range transmission for

Engine has about 49,000 miles on it and trans has about 400 miles on it since rebuild. All of the tires are in good condition including the spare. This truck started its life down south and the body is in Great shape! Truck gets an average of 19 miles per gallon! Truck has dual fuel tanks with a tank to tank fuel transfer system for easy one side fill ups!

Truck needs valve cover gasket, serpentine belt (it squeaks on start-up) and to have the seat recovered. Also there is no a/c hooked up on this vehicle. These are the things that I am aware of.

This Truck Is Being Sold In AS/IS Condition!

This Vehicle is available for LOCAL PICKUP ONLY!

Also, if you are the winning bidder and would like to fly into Metro Airport, we can make arrangements to pick you up so you can drive it home!

A Deposit of $200.00 is due payable thru PayPal within 48 hours after end of auction!

Balance due on truck must be paid for in CASH at time of pick-up!

Truck Must be picked up within 14 days after end of auction!