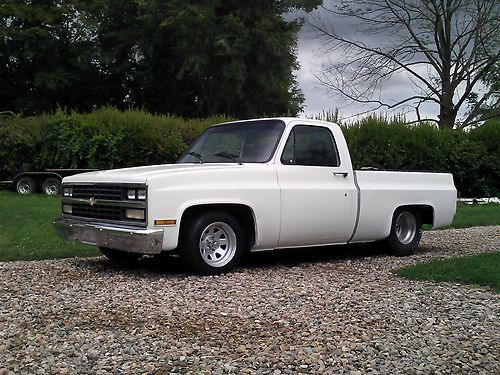 Condition: UsedA vehicle is considered used if it has been registered and issued a title. Used vehicles have had at least one previous owner. The condition of the exterior, interior and engine can vary depending on the vehicle's history. See the seller's listing for full details and description of any imperfections.Seller Notes:"The body has a couple of minor dents and scratches, but it still looks good."

I have a 1985 Chevy C-10 Silverado short bed Prostreet pick up for sale, its an older build, but still looks good. It has a 454 Big Block in it that runs good, and has a TH400 automatic trans, the truck runs and drives good down the road, and it also has a narrowed rear end with 4:11 Gear. The truck has power steering and brakes, it has front disc brakes and rear drum brakes, it has also been lowered,and been lowered the right way with drop spindles, has been C-Notched and 4-Linked and has weld wheels on the back with Hoosier drag slick tires 31x18.50-15LT, and they have a little tread left on them, its had the rear tail lights shave as well as the rear bumper and the side mirrors has been shaved off as well and has a LED light strip for the rear lights. All the lights work and the interior is in good shape and all the gauges work except the gas gauge, and the truck has 99,273 miles on it, and has a custom front grill off of a 1990 Chevy suburban, its a good looking truck and turns heads, it dose need some work it needs the inside of the bed finished off, and a little TLC and this would be one sweet truck, and it can be driven on the street like I said all the lights work, and it has a tonneau cover for the bed, and If you have any other questions just ask there is also No Reserve I am starting the truck out at 3,800 so who ever has the winning bid owns this sweet ride, sold as is.

THERE IS NO RESERVE