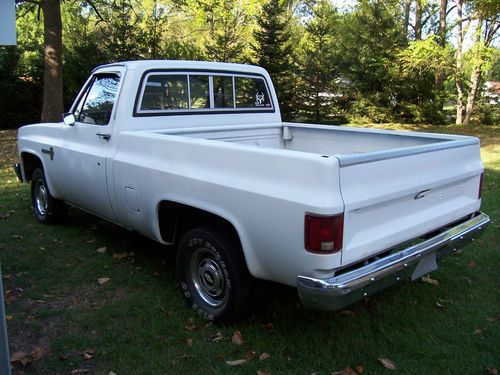 Condition: UsedA vehicle is considered used if it has been registered and issued a title. Used vehicles have had at least one previous owner. The condition of the exterior, interior and engine can vary depending on the vehicle's history. See the seller's listing for full details and description of any imperfections.Seller Notes:"normal wear for a vintage truck great body and interior"

1984 SWB pickup selling for a buddy of mine I got the motor and moving the rest for him has a great straight body and current inspection I drove it before removing motor and runs and rides very nice great brakes. I do have the 4 speed and Hurst shifter that was in the truck and came out of a Camaro that can work a deal on for extra if you want it for the truck. It has nice rims and tires and great Interior the bed very nice. all rockers cab mounts and floor pans great see photos doors nice too no rust under side. all glass nice and slider in rear. I also have the bell housing, pressure plate, clutch, throw out bearing, fork, and rod that will go with trans if you want to make a deal on it also. This is for the truck without motor or transmission, no exhausts. driveshaft is in the truck. also nice hood no bends and doors lock. also 373 gears. need this out of my yard will make a great rat project,lowrider,or drop on a 4x4 frame. If I did not have to many irons in the fire I would keep this myself bodys this nice are getting hard to find. got questions just ask and buyer responsible to remove the truck soon after sale.  Bring CASH or Cashiers Check thankx....Pale