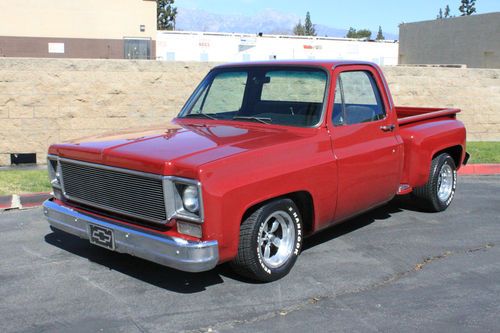 Condition: UsedA vehicle is considered used if it has been registered and issued a title. Used vehicles have had at least one previous owner. The condition of the exterior, interior and engine can vary depending on the vehicle's history. See the seller's listing for full details and description of any imperfections.Seller Notes:"1975 Chevrolet C10 Pickup. I am the second owner, I have owned the truck since 1996. Engine is a rebuilt 350 c.i. Edelbrock high rise air-gap manifold, Edelbrock 650 cfm carb. Mallory distributor. Hooker ceramic coated super competition headers. 2 Flowmaster mufflers with 2" turn-downs. Engine has just over 100,000 miles. ***SMOG EXEMPT***The body has been cleaned up, shaved off emblems, side marker lights, tailgate chains, and stock tail lights. Cadillac tail lights have been frenched into fenders. Billet aluminum grill. American Racing S200 Daisy wheels. Interior is reupholstered bench seat, carpet and dash cover. Le Carra steering wheel. Sound system is Pioneer Premiere head unit. Rockford Fosgate amp and 2 10" sub woofers behind the bench."