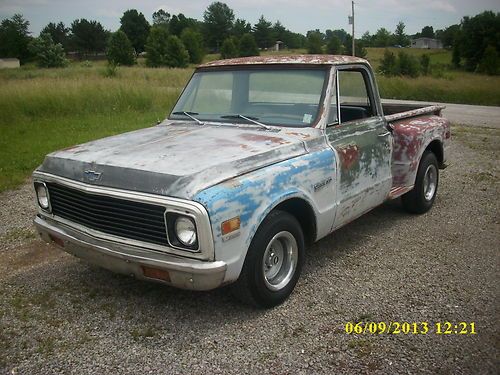 We bought this truck while we were aggrivated with our own personal truck while it was getting some upgrades done. We thought we would just kick around in this one and put ours off to the side. Well, ours is finished and we are back to liking it again, so this one has to go.

It is a 1971 Chevrolet C10. It has a small block, not going to say it is a 350 as we have not ran any block numbers, but we think it is. The engine has had a few upgrades. It has a fairly new Edelbrock 600 cfm Performer carburetor, has been converted to HEI ignition, new spark plug wires, newer alternator and of course,, headers. The motor starts, runs and pulls the truck down the road just fine. It does not run hot and holds good oil pressure

The trans is a 3 speed manual that has been converted over to floor shift. Linkage is good and tight, shifts fine. The truck has power steering and manual disc brakes. It steers and stops just as it should.

The body has a few dents and boo boo's here and there, it is 42 years old you know. It needs a windshield, there is a dent in the roof, the right front fender is rusted out underneath the battery tray like they all do. The area above the windshield is not rusted out like so many of them we come across.

Tires are in pretty good shape. They are radials and mounted on rally wheels that are fully dressed with caps and rings. Front bumper has a dent, back bumper is gone and the bed floor is replaced with steel diamond tread. Tailgate functions, doors open and close good. It does have a trailer hitch.. Turn signal switch is bad, i have a new one I will include, just haven't taken the time to replace it.

All in all, this is a good drive while you restore or just drive as it is. It would be a great shop truck or an everyday beater. It isn't fancy, just an old truck that is not as good as some but better than most of it's age we come across.