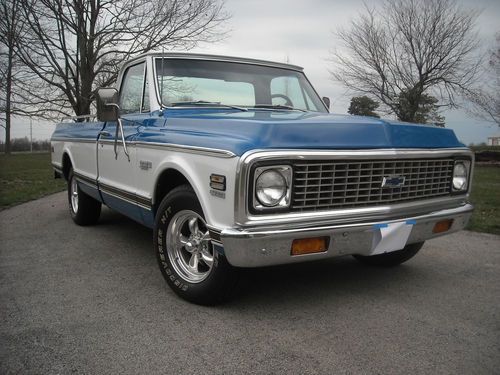 THE BEST of both worlds...a SHARP, DEPENDABLE vintage truck...that your not

afraid to drive anywhere!
All work described below completed by a ASE Certified GM Master Mechanic...Over $20,000 in receipts
that will come with the truck.
HIGHLY DESIRED Blue/White factory correct color combination on a RUST FREE BODY
FACTORY OPTIONED 350 V8 with automatic, power steering, power brakes and air conditioning
ENGINE: Original 350 motor completely rebuilt with all new parts including but not limited to Valves,pistons,rings,carb, water pump
fuel pump, hoses and gaskets.....I have the original valve covers, carb and Factory breather that will go with the truck. New
radiator also installed  Engine was Balanced and Blueprinted.
TRANSMISSION: Factory automatic  (L1-L2-Drive), completely rebuilt. Shifts perfectly.
SUSPENSION: ALL NEW, Including A-arms,  tie rods, bushings, bearings, springs, shocks....(see pix)
ALSO BRAND NEW: Dual exhaust, completely new brakes and calipers, new power steering pump, and rebuilt steering box.
New windshield and gasket, new seat cover and carpet, and brand new exterior mirrors, (Installed after pictures
were taken). TIRES AND WHEELS HAVE LESS THAN 700 MILES.  16" COOPER HT RADIALS WITH EAGLE
ALLOY MAGS........SHARP!  New rear bumper and bracket.
Everything works as it should....interior and exterior trim show minor bumps, bruises and/or aging. I had a Dupont paint shop computer
color match the blue paint to redo the bed floor. I will provide the paint.
I have tried to honestly describe this truck to the best of my ability......In my opinion, as stated above, it's not a trailer queen, but it is a
Beautiful, dependable truck that starts every time, and is a BLAST to drive!
Good Clear Title.   Serious buyers feel free to send out a professional inspector or your welcome to come drive it yourself...you'll be hooked!   Questions? Contact Jim at 816-729-8513   CASH OR WIRE TRANSFER ONLY PLEASE.    No I do not need help selling.