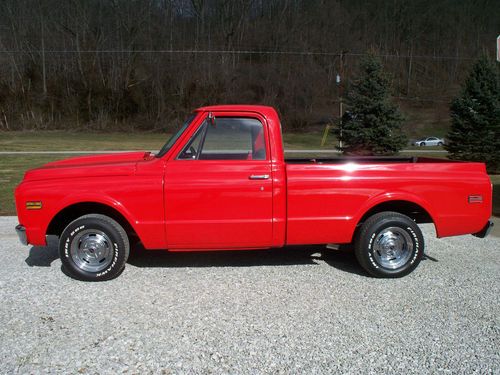 Super straight southern pickup truck. If you are looking for a turn key ride, that's not full of body filler, and is a beautiful driver, this is the truck. It is a 1971 model, and it is not perfect, but it is a really nice solid truck. Floor pans look to be original and are solid with no rust. Had a Body Shop manager look this truck over from top to bottom. He found no body filler, but did say that the rockers had been replaced, and the doors looked like they have been skinned. He found no work done to the bed. The dash pad has a few cracks, but is presentable. The seat has been recovered and looks very well done. The heater controls and the heater core and the heater blower motor have been removed. And there are aftermarket gauges and a switch panel installed to control the necessary functions of the truck. Interior door panels are aftermarket, but again was very well done. Very nice carpet. Now the drive train. The engine came out of a 56 Chevrolet my friend is restoring. The block has been milled sometime in its life and the engine code is very hard to read, but with a magnifying glass, I found what looks to be RQ, which match's the casting number years for a 1964 8 cylinder 327. Motors breakdown for the engine is RQ /1964/8-327-w-M/T-A/C-HPE. But I in no way guarantee that is what the engine is. But I have built, raced and enjoyed many small block Chevrolet engines. It has a hydraulic mid-range camshaft that has that really cool idle and sounds like your buddy's L79. And I'm sure this engine has been balanced. Has that radical sound and does not shake or vibrate. The engine has an Edelbrock Manifold and Carb. The mileage on the truck or engine is unknown, but it does smoke, shuts off tight, and runs like a scalded dog. Clutch is tight and does not slip.The transmission is a M20 Muncie 4 speed with a Hurst Shifter and  is quite as a church mouse. Rear differential has 4:11 gears. The installation of the driveline is not all monkeyed up, and is very well done, with new motor and transmission mounts. The exhaust is Rams horn manifolds and goes through flowmaster mufflers and sounds really good. If you decide to put the interior back to the original look, most of the parts needed are brand new and come to with the truck. The heater controls, the ignition switch, the dome light, dash and dash bezel, wiper arms and blades, antenna, etc. , see pictures. If you wanted to put the heater box, heater core, and blower motor back in the truck, it can be done easily. The firewall just has plates blocking the holes. Remove the plates and reinstall the parts. This truck drives like a new 1971, handles nice, doesn't wonder, rides like it did in 1971. Now down to the important part. Ask questions, come and see the truck. I'm selling this truck for a friend. If you are the winning bidder, be prepared to pay for it with in 10 days of auction end. And the truck is being sold AS-IS, I have described it as honestly as I can. You can message me through eBay and I will get back to you as quickly as I can. Thanks for looking.