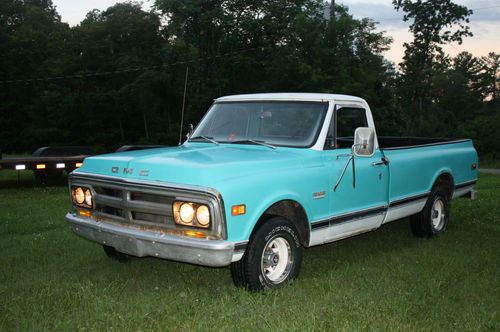 This truck came from an older gentleman who collected Chevy and GMC trucks. This was his driver truck. It was driven until 2012 before the gentleman became ill. The truck has a straight 6 with HEI ignition (no points), 3-speed on the column, manual steering and brakes. The truck runs great (it has a lot of power for a 6), the shifter shifts smoother than any other 3 on the tree I've ever driven. The motor may have had the short block rebuilt (the short block has been painted but the head hasn't), there are also new gaskets visible on the motor indicating the truck was kept up. The heat and defrost work, wipers work, has a CD radio, reverse lights work (one needs a bulb), turn signals work, parking brake works, BRAKES need a little work ( the pedal is soft, brakes feel like they need to be bled). This truck runs and drive great, I have been using it around the house hauling junk and brush. This is NOT a four-wheel drive truck.

The body has the usual rust for these years, but the truck is NOT falling apart and has a fairly straight body with not dings or dents. This will make a great shop truck, rat rod , or you could create your own "farm" truck race truck like on TV.
This truck is for sale locally, I reserve the right to stop the auction any time. Also I can deliver (within a 200 mile radius of Lynchburg Virginia) for an added fee, if your are interested in delivery email me you address and I can tell you what the charge would be.