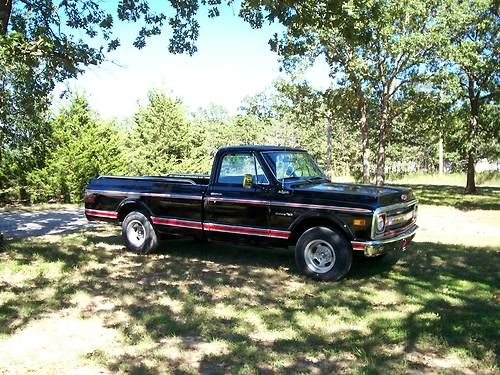 Condition: UsedA vehicle is considered used if it has been registered and issued a title. Used vehicles have had at least one previous owner. The condition of the exterior, interior and engine can vary depending on the vehicle's history. See the seller's listing for full details and description of any imperfections.Seller Notes:"aluminum trim has dings where people have opened their doors into it right corner of bed dented been repaired but not very well"

1969 Chevy half ton C10 L.W.B. No hot Rod-Stock-Just like it came from GM. Only with some updates. new HEI distributor with new wires factory rebuilt 2barrell carburetor  new rubber brake lines front and rear (flex lines) new rebuilt master cylinder engine  heads rebuilt this is a 307 engine 3speed standard transmission now shifter on floor but comes with factory rods to install back on column if you want Truck has NO P.S      P.B.       A.C.     truck gets excellent fuel mileage.  true miles on engine unknown.  runs like new.  no smoke best I can tell it used no oil from one change to another changed every 3000 miles. all new tires  drives very good  stops good and also rides good.  If you have any questions  email me at   rn1940@Hotmail.com   I can give You my phone # and will answer all questions.     original color of truck was white.  trim has some dings in it from people opening their doors into it..     right rear of bed was dented . been repaired but not very well. miles on this truck are unknown  to me;