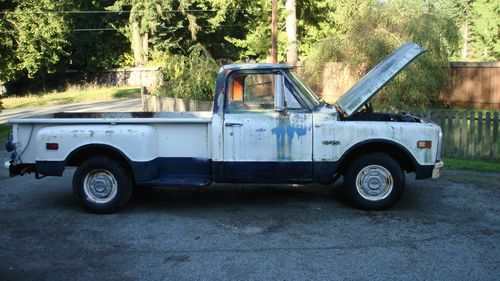 Condition: UsedA vehicle is considered used if it has been registered and issued a title. Used vehicles have had at least one previous owner. The condition of the exterior, interior and engine can vary depending on the vehicle's history. See the seller's listing for full details and description of any imperfections.Seller Notes:"THIS IS A 1969 C10 LONGBED STEPSIDE-V8,,4 SPEED,,POSITRAC FACTORY REAR,SAT AT FARM FOR YEARS,HAD A CANOPY ON IT, REAR DRIVER SIDE BED RAIL IS RUSTED OUT, CAB ALSO HAS RUST, DUE TO CAMPER SITTING AT ANGLE,DOORS VERY DECENT AND SOLID FOR THE MOST. FRONT NOSE LOOKS DECENT, RAD CORE SUPPORT GOT SOME RUST AT 1 SIDE OF BOTTOM, RUNNING GEAR IS AWESOME! THE FARM MECHANIC WAS A CIRCLE TRACK RACER OR SOMETHING SIMILAR AND PUT SOME DIFFERENT PIECES ON THIS MOTOR, FACTORY POSi REAR, BAD BRAKES (NOT SAFE) WIPERS WORK- HORN WORKS, NEEDS HEADLIGHTS REPLACED- HEATER FAN COMES ON, TRUCK COULD USE A FULL RESTORATION, MOTOR MAY BE FINE, NO ROD KNOCKS ECT. BUT SOLD AS-IS!"

YOU ARE LOOKIN AT A 1969 CHEV C10 LONGBED STEPSIDE, THIS TRUCK SAT ON FARM FOR MANY YEARS, WORD IS THE FARM MECHANIC WAS A CIRCLE TRACK RACER OR SOMETHING ,MAY HAVE PUT DIFFERENT PARTS ON THIS MOTOR, DO NOT KNOW IF MOTOR IS ORIGINAL, BUT IT SOUNDS PRETTY GOOD WITH CAMEL HUMP HEADS..

FACTORY POSI-TRAC REAR, 6 LUG WHEELS, I COULD NOT READ THE REAR CASTING NUMBERS BUT IT MAY BE THE 4 BOLT 350? FRONT NUMBERS BELOW HEAD ON BLOCK ARE (V0820C NU & 10C107510) THESE ARE THE PREFIX NUMBERS, BY THAT YOU SHOULD BE ABLE TO KNOW MORE,THE RADIATOR IS NOT ORIGINAL ITS A MONSTER SIZE, 3-4 CORE, I DO NOT KNOW WHERE THEY FOUND IT, BUT IT WILL RUN COOL? Has some killer VERY RARE Vintage Chevy Logo Mickey Thompson Alluminum Dual Breather Valve Covers I HAVE NEVER SEEN ANOTHER SET OF THESE, (BRAKES ARE BAD) I DO NOT RECOMMEND DRIVING THIS TRUCK ANY RURAL OR RESIDENTAL AREAS.. HORN WORKS, WIPERS WORK, HEATER FAN COMES ON, DOORS NEED THE INSIDE PANELS PULLED AND OIL UP REGULATORS TO MAKE THE WINDOWS ROLL-UP AND DOWN, DRIVER SIDE COMES DOWN A BIT BUT NOT MUCH, OUTSIDE DRIVER HANDLE NEEDS FIXING, OPENS FROM INSIDE, CAB HAS RUST IN MANY PLACES (IF YOU ARE GOING TO RESTORE TRUCK CAB WOULD HAVE TO GO) FRONT NOSE LOOKS SOLID, EXCEPT FOR RAD CORE SUPPORT  ONE ON THE BOTTOMS HAS RUST, REAR BED RT SIDE SEEMS PRETTY SOLID, DRIVER SIDE BED RAIL IS BADLY RUSTED IN BACK DUE TO CAMPER SAT ON IT AND WATER RAN DOWN AT AN ANGLE FOR YEARS, TOTALLY RUINED THE BACK SECTION OF THAT CORNER, TAILGATE IS SHOT, DUE TO THAT CORNER ALSO BEING RUSTED (SEE PICTURED) THE FENDER ON THE BAD SIDE MAY BE SAVABLE, BUT THERE IS SOME RUST ALSO ON INNER LIP, AND THE SMALL RUNNING BOARD IS HAS BAD RUST AS WELL, OTHER SIDE SEEMS TO ALL LOOK GOOD. GEARS ALL WORK, CLUTCH FEELS FINE, TRUCK HAS ABOUT 5 COLORS AT LEAST, STRANGE? I THINK IT WAS ORANGE LIKE MAYBE CITY VEHICLE OF SORT O THE RADIO DELETED (FACTORY) THERE IS WHITE-GREEN-BLUE- AND EVEN PINK UNDER THE HOOD, I DO NOT KNOW WHAT TO THINK, YOU ARE GETTING A TRUE RARE COLLECTOR TRUCK I GUESS.. THIS TRUCK IS BEING SOLD AS A RESTORATION PROJECT OR PARTS VEHICLE OR WHATEVER YOU MAY CHOOSE TO DO WITH IT,WE CAN DRIVE IT UP ON YOUR TRAILER NO PROBLEM, BUT IT WILL NOT BE DROVE LONG DISTANCE THE WAY IT IS, UNSAFE TO DO SO. PLEASE ASK ANY QUESTIONS OR CONCERNS PRIOR TO BIDDING, SO BE SURE TO  READ ALL DETAILS CAREFULLY DUE TO TO OUR RETURN POLICY, SOLD AS-IS (NO RETURNS-LOCAL PICKUP ONLY) DOWN PAYMENT REQUIRED WITHIN 48 HOURS AUCTION END, FUNDS MUST BE ARRANGED AND PAID IN FULL BY 7 DAYS AND NO EXCEPTIONS TRUCK WILL NEED TO BE PICKED UP WITHIN 2 WEEKS.. THE TITLE IS CLEAR AND IN MY NAME, BUYER WILL NEED TO PROVIDE A VALID DRIVERS LICENSE AND CURRENT ADDRESS FOR SELLER RECORDS