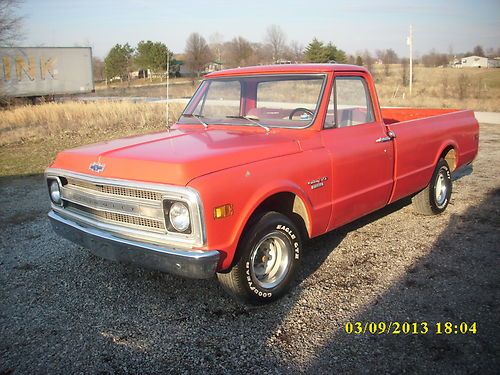 This is a 1969 Chevy C10 two wheel drive long bed truck. It is the typical truck of this era, has some rust, some mechanical issues, a few cosmetic flaws and lots of character and potential. It is NOT a numbers matching show truck, a concours restoration or a time capsule unmolested truck. it is a good old work/shop truck with a good base to start with or just keep it like it is and drive the wheels off of it. It does have it's good points as well as bad, I will try to cover both sides as best as I can.

First, mechanical condition.. It is a small block Chevy, not really sure what size. It starts right up, idles fine and pulls down the road. It has been converted to HEI ignition and should really have a new set of spark plug wires, the ones on it are pretty shabby. It has a Holley 600 carburetor on a factory intake. Has shiney valve covers and air cleaner but they have seen better days. Cast iron exhaust manifolds with dual exhaust. It is a three speed manual transmission , 3OTT (three on the tree). If you know these old trucks you know what is coming next, the shifter linkage needs adjusting. It drives and shifts but you have to know the "touch". To go to second, you almost slide up into reverse, then back down and up n over into second. The shift collar has been broken at one time and looks like it was JB Welded back together. Again, nothing major but a common problem with these old trucks and would really need to be fixed before doing a lot of everyday driving. The truck was an air coditioned model but the a/c components are long gone. Power steering works good and brakes stop like they should. Lights burn, wipers wipe.

Next, cosmetic condition. It has rust, has had some rust repaired and still needs body work. Chrome front and rear bumpers, pretty nice grille and has had the passenger fender replaced at one time, although it has a dent in it now. Tailgate has a big dent along the top but still functons as it should and bed is in real good shape. Rockers are rusty, inner front fenders are like they all are,, rusty. The good point is the area above the windshield does not appear to be rusted out like a lot of these trucks do. Doors open and close, passenger side outside door handle button is broken but you can still open the door with it. Paint job looks like a home shop effort but color is good. It is popping off in some spots. Interior needs a drivers side door panel.

I know i was pretty rough on the truck but had rather talk it down than mislead anyone about it. Does it need work, oh yeah. Would it be a good drive it while you work on it truck, oh yeah. Would I take off to either coast in it,, oh no, no way. All in all, it is just a good old truck that could make you a good shop truck, work truck or with effort and money a really nice cruiser. If you have any questions, do not hesitate to ask as I am sure I missed some things. We are flexible enough that we can work with your shipper if at all possible. Thanks and good luck.