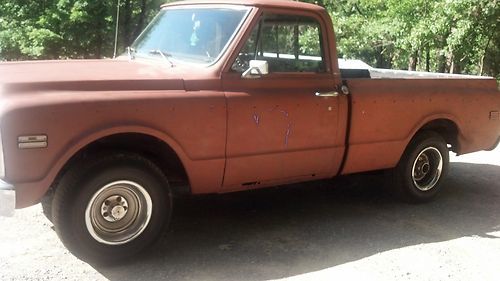 Condition: UsedA vehicle is considered used if it has been registered and issued a title. Used vehicles have had at least one previous owner. The condition of the exterior, interior and engine can vary depending on the vehicle's history. See the seller's listing for full details and description of any imperfections.Seller Notes:"69 chevy c10. runs and drives. 305 motor, 350 turbo trans, power steering power brakes, ac cab i think. disc front brakes. some rust. would be a great solid foundation for a restoration, clean tn title. buyer picks up i do not ship. not nothing fancy but has great potential. all outside lights work blinkers, brake lights, tails, markers. any questions feel free to contact me 931-224-1107. the truck is for sale locally also"

69 chevy c10. runs and drives. 305 motor, 350 turbo trans, power steering power brakes, ac cab i think. disc front brakes. some rust. would be a great solid foundation for a restoration, clean tn title. buyer picks up i do not ship. not nothing fancy but has great potential. all outside lights work blinkers, brake lights, tails, markers. any questions feel free to contact me 931-224-1107. the truck is for sale locally also