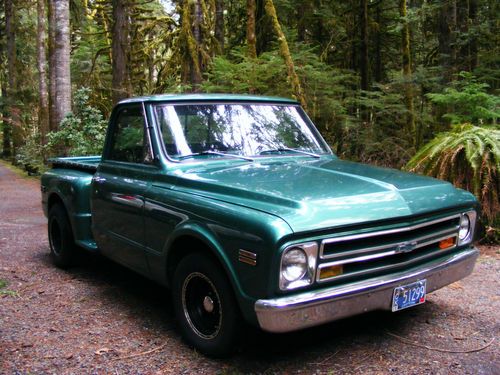 Selling my  1968  CHEVY  C-10 Stepside. One of only two years this body style was featured. The visor is obviously removed along w/the huge hood ornament. The body has no rust issues, & is very clean. The amazing 327 engine has just under 12,000 mi. on the FIRST rebuild, w/approx. 375 horsepower, what an amazing sound!  3 speed automatic B&M tranny. Dual exhaust exits on side, behind rear tires. Currently has bench seat, HOWEVER. I will include a pair of black Ricarro bucket seats that will fit nicely (never had a chance to install).   All work has been performed solely by local AAA approved, certified master mechanic (although I'm not), this truck has no issues, & is, of course being sold as is. The next owner will truly score a beautiful vehicle. It is also being sold locally, so it's possible the auction could end early.    The ONLY form of payment accepted in this listing is  1- direct wire transfer  or  2-  bank cashiers check. NO PAYPAL.  Once funds clear my account, vehicle can be picked up.  Buyer is FULLY responsible for vehicle transporting. This is my baby & I must insist on a smooth, safe transaction PERIOD!! I will HATE to see it go!  Please ask any ??  I will respond quickly.