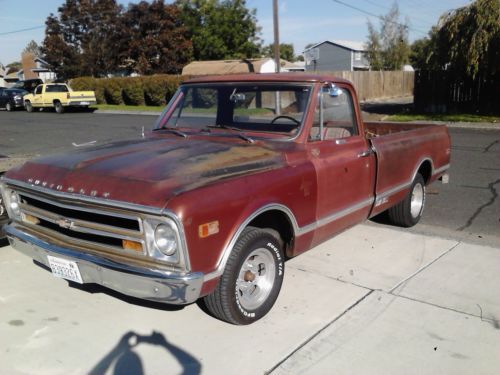 This is a 1968 Chevy C/10. All original as far as I can tell. 327-4bbl, with a 4 speed /granny low. Truck did not come with power steering, but I just bought a conversion from a 1971 C/10 with power steering. I have not installed the parts yet. I just repaired the fuel system. It was getting clogged, and not running right. I changed the fuel tank, flushed the steel (frame) line, replaced all rubber sections of hose, added an in-line fuel filter before the fuel pump, added a new fuel pump, added an in-line filter after the fuel pump, and replaced the fuel filter in the carb. Now it runs fine, and hasn't given me any problems yet. It has a brand new starter, but it needs to be shimmed. It was grinding a little when I started it, so I shimmed it up a bit, and it helped but there is still a slight whining. I just replaced the heater core which was leaking, and also added a new heater control assembly which is all hooked up, but I haven't got the fan working yet. I have no power to the blower motor. I ran out of time to work on it for now, so that is how it is being listed.

The truck has a bit of rust through in a few places in the interior floor, also the kick panels, and the rockers have some rust. I have seen a lot worse than this. The good thing about this truck is the front fenders, both doors, and the box appear to be rust free. It is a custom cab with the dash intact. windows go up, and down, but need new weather stripping throughout. I put a new turn signal switch I it so now the head lights, tail lights, brake lights, turn signals are all working, but the side markers do not, and the front passenger side signal light lights up when the brake is applied. I was going to replace all the wiring if I kept the truck, but I have too many projects, and need to sell this so I can use the money towards the purchase of a dependable auto that is not a project.

The stock radio is in place, and I can hear the sound through the speakers when radio is turned on, but the antenna is broke so I can't tune in any stations. I would bet that it works, just don't know for sure. This truck could be driven as is, locally while the little issues it has are addressed, but it is still a project. I would not depend on it to get me 300 miles down the road and back just yet, but if you stay close to home until all the issues are resolved you should be fine. The truck runs good, smokes just a little at start-up, but doesn't knock, and runs smooth. I drive it to work all the time. The truck just sat for years down the street, and now I know why I never saw it driving around. It had about a dozen little problems when I got it, but I have it running, and dependable enough that it can be used locally while you work on it. It has a nice set of 6-lug slotted mag wheels 15X8 rear and 15X7 front, and a brand new set of BFG Radial T/A's. I also have a set of white spoke wheels mounted on Wild Country tires.

Winning bidder is responsible for transport of vehicle. A non-refundable deposit of $500 is due within 72 hours of the auctions end. Winning bidder can make transport arrangements, and I will accept the balance in cash only at the time the shipper picks up vehicle. I will accept PayPal for the deposit, and the balance, or PayPal for the deposit, and cash when shipper arrives for pick-up.

Please ask question prior to bidding. Vehicle is for sale locally, and auction may be terminated if truck sells before the end of the auction.