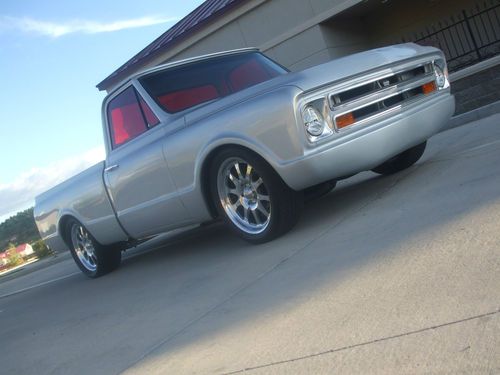 UP FOR BID IS THIS SUPER CLEAN CHEVY C-10 SHORT BED, IT HAS A FEW BODY MODS SUCH AS A SMOOTHED HOOD, SHAVED COWL AND WIPERS, FRONT AND REAR ROLL PANS, SEALED TAILGATE, AND BED POCKETS, AND HAS BEEN PAINTED A NICE CLEAN SILVER COLOR.

THIS TRUCK IS A NICE LITTLE SHOP TRUCK, OR HOT ROD, RUNS GREAT ALTHOUGH IS A BIT LOW GEARED, ITS A NICE CRUSIER LOCAL CAR SHOW TRUCK, OR SIMPLY USE IT FOR YOUR BUISNESS, IT GETS PLENTY OF ATTENENTION, IN MY OPINION NOT A SHOW TRUCK,ALTHOUGH SHOWS WELL, NICER THAN YOUR DAILY DRIVER, (I AM QUITE PICKY)

NO HEAT OR A/C, I WAS PLANNING ON DOING THE VINTAGE HEAT/AIR THING

2INCH CPP DROPPED SPINDLES IN FRONT WITH DISC BRAKE CONVERSION, 4 INCH DROP SPRINGS IN THE REAR WITH 2 INCH LOWERING BLOCKS, SITS PERFECT, NOT TO LOW AND NOT TO HIGH.

NEEDS INTERIOR REDONE, AND DASH PAD, ALTHOUGH LOOKS NICE AND FAR FROM BEING A JUNKER, NO STERIO JUST THE RUMMBLE OF THE EXAHUST.

ITS A REAL NICE LITTLE TRUCK FOR THE MONEY, DRIVES NICE WITH NO ISSUES. I AM A MUSCLE CAR GUY THATS WHY I AM GETTING RID OF IT.

EMAIL WITH ANY QUESTIONS, AND PLEASE BID TO BUY, HAVE FUNDS IN HAND READY FOR WHEN THE AUCTION ENDS.